Wacom has added yet another drawing tablet in their lineup. The latest Wacom Intuos Pro small completes the Intuos pro series. It is the cheapest tablet right now with the Wacom Pro Pen 2 support and comes with features like wireless connectivity and tilt sensitivity.

Intuos Pro (small) is the sized-down version of the previous – Intuos Pro tablets which substantially brings down its price while maintaining the same features.

In this Wacom Intuos Pro small review – we will take a deep look at what features the tablet has to offer and find whether it is worth the money.

Unboxing – What you get in the box

When you are talking about Wacom tablets, one thing you can be totally sure about is the build quality. Wacom tablets are known to last a long time.

The tablet comes in the classic arrangement where you have a drawing area on the right and buttons and shortcut options on the left. The tablet is very thin and easy to fit in a backpack. It comes in a deep grey color which makes your setup look good.

Intuos Pro S is made of brushed aluminum which makes the tablet feel strong and hefty in hand. Its LED light at the left glows when the pen touches the surface. It has an aluminum back with two big rubber feet at top and bottom. Overall it feels like a well-thought-out premium tablet.

The small size Intuos pro has a total active working area of 6.3 x 3.9 in which is sufficient enough for most of the tasks. The small size gives it great portability. It can easily fit in a backpack without taking too much space. There is enough extra space around the drawing area for your palm to rest.

The tablet can be used by both left and right-handed users. You can switch from the left hand to right-hand mode in the driver settings.

It is no secret that Wacom tablets have a really good drawing texture. After using a lot of tablets from various manufacturers it is very clear that – Intuos Pro has the best surface texture. Even gliding your hand on the tablet sounds like paper.

The texture is well balanced, it is neither too aggressive nor very subtle. The top surface is made of scratch-resistant material which holds up really well in the long term.

On top of that, you have extra textured pen nibs provided in the box which lets you further customize the feel of the pen while drawing. 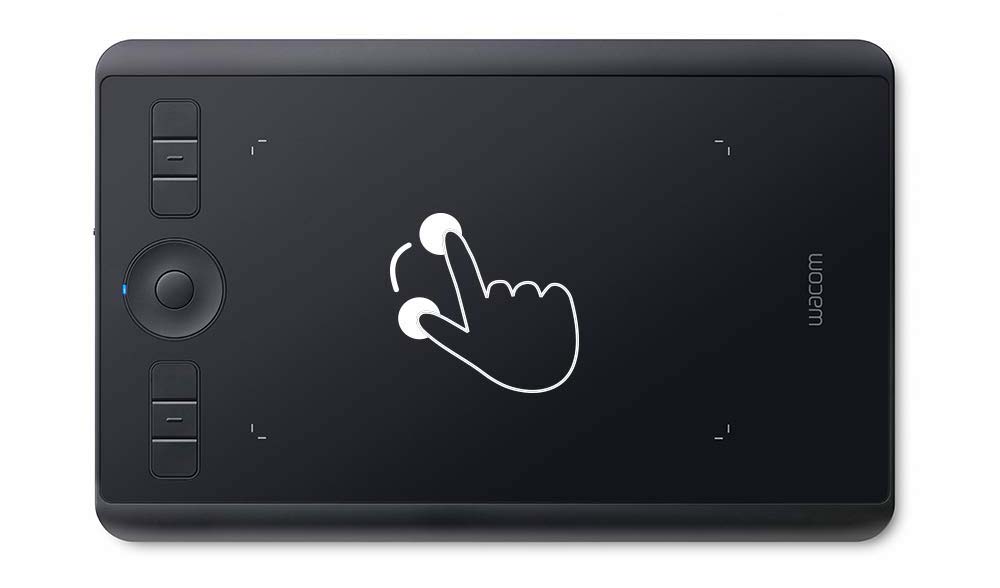 Wacom Intuos (Amazon) is the only tablet that accepts touch input and the multitouch gesture. What it means that you can do tasks like zoom, rotate, and pan by using your fingers.

The touch is cool but in reality, it does not work as smoothly as you want it to. The tablet also seems to be equipped with palm rejection. In case you do not want to use the touch controls you can simply turn it off by the help of the switch located on the side trim.

The Wacom Pro Pen 2 is arguably the best stylus in the market for any kind of digital work. It has 8192 levels of pressure sensitivity along with ±60° of tilt support. Now there is a lot of stylus which comes with 8192 pressure levels but they do not perform as good as Wacom.

What differentiates Pro Pen 2 from all the other stylus is how stable, smooth, and consistent it performs and its ergonomics. The strokes made by this pen are very consistent. It has a well-balanced pressure curve which very gradually increases the width of the strokes.

The tilt sensitivity works great. The transition between a normal mode and to the tilt mode is very quick. It enables you so smoothly work with pressure and tilt at the same time.

There are a total of three buttons on the stylus. Two are present on the side of the pen whereas one is present at the back and works as an eraser. The two side buttons can be set to a different shortcut in the pen settings.

The side buttons light and clicky to press and have good feedback. The eraser at the back is pressure enabled and changes the size of the eraser depending on how hard you press.

The Wacom Intuos Small comes with a high-quality pen holder. The pen holder allows you to keep the pen in upright as well as flat position. It is heavy and made of metal. At the bottom, it has a nib remover tool which allows you to easily replace the pen nibs. The base opens up to reveal extra pen tips.

The pen comes with a total of 10 pen nibs, 6 of which are normal nibs, and the other 4 nibs are felt nibs which gives the different feeling of grip on the tablet surface. The base has small rubber pads while it does not allow the pen holder to slip on smooth surfaces.

The Intuos Small comes with a total of six shortcut buttons that are in the shape of a beveled square. The buttons are arranged in two groups of three.

The buttons have raised dashes that help to identify them without looking. Like everything else the buttons are of good quality and have a sharp click on pressing.

All six expresskeys can be set to a different shortcut in the driver. On top of that, you can also assign the application-specific shortcut to buttons. Where the buttons change automatically depending upon the application you are using.

In addition to the shortcut buttons, the Intuos small also comes with a touch ring. The touch ring is super helpful and allows you to perform tasks such as zoom, rotate, pan, scroll, and most importantly – change the size of the brush and eraser.

Wacom Intuos small can be connected to the computer in two ways.

In a wired connection, you can connect the tablet with the computer using a USB Type-C cable. With the cable measuring 6.6ft (2 m) you won’t have any problem reaching your computer even if it placed a little far. The Type-C cable also gives you added advantages.

Or if you really hate wires, the tablet can connect to the computer using Bluetooth. In other wireless tablets, you have a wireless receiver that needs to be plugged to the computer – which can easily get lost. The Bluetooth connectivity in Intuos Pro does not have these issues and none of your valuable ports are occupied by an adapter.

In Bluetooth mode, the tablet can last multiple days of casual use on a full charge. You can recharge the batteries by simply plugging your tablet into the computer using the same type-C wire.

How to set up the wireless connectivity

The driver allows your tablet to communicate with the computer and understand the pressure and tilt data. It also allows you to customize your shortcut buttons.

The pen comes with 8192 levels of pressure sensitivity but you may need to press hard to reach the maximum levels. The driver allows you to finetune the pen pressure to your preference. You can also change the default shortcut of the two side button on the pen.

There are a number of tables in the market that delivers comparable features at a lesser price but what you are getting here is the quality.

If you want the absolute best drawing tablet with top of the line build quality and performance which will last a long time this is the best tablet you can get.