Wacom tablets are pretty much industry standard and can be easily spotted in all the major digital studios. One of the main reasons for their popularity is their unmatched stylus named Wacom Pro Pen 2. Now, most of the Pro Pen supported tablet cost north of 1000 bucks which may not be super accessible to beginners or hobbyist. 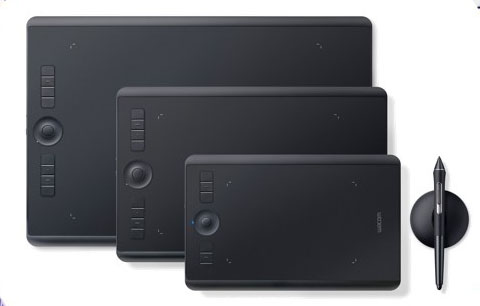 That is where the Wacom Intuos Pro comes to rescue. It is one of the cheapest devices in the market which supports Wacom’s Pro Pen 2. The Intuos Pro tablets have been in the market for quite a while and are constantly upgraded.

They are so good and so inexpensive compared to their display counterparts that it has become the new favorite tool for the pro artists and can be easily spotted in their setup.

The last few years have seen a number of new brands coming up new budget tablets which are super cheap and claim to give the same performance as the Wacom Intuos Pro. So where does Wacom Intuos Pro stands and is it actually worth the money it cost.

In this Wacom Intuos Pro Review, we will look at all the features the tablet has to offer and find what makes the Intuos Pro tablet different from all the other third-party tablets.

Here is the list of all the main features the tablet has to offer. These features will give you a brief idea of what we are looking but these numbers often do not tell the full story, so it is highly recommended to read till the end.

Intuos Pro is available in three sizes Small, Medium and Large. The image above shows the real-life difference between their sizes.

Other than size and number of shortcut buttons there is no difference between the three tablets. You get all the same features all these three tablets.

In terms of price – you may have already guessed the smaller Intuos Pro is the least expensive followed by the medium and Large Intuos Pro models. Although the prices of these tablets keep changing, you can click here to check the current prices and offers on Amazon.

Paper edition of the Wacom Intuos Pro is like a 2 in one device. It works like a normal Intuos Pro – but can also convert your paper drawing into digital files with the help of a special pen.

The tablet uses a companion app called “Inkspace” – which is available for Windows, Mac, IOS and Android.

How does it work?

With the paper edition of Intuos Pro, you get an additional Pen. The pen looks and works like a normal pen but it can store your drawings digitally when you draw with it on top of Paper edition Intuos Pro.

The tablet can store up to 200 pages of your artwork right on the tablet. It also allows you to create layers within the pages without connecting it to the computer.

After you are done you can import your files from the tablet to the Inkspace app which allows you to save your files in JPG, PNG, SVG and PSD formats.

With paper edition, you get an extra pen a clip for clipping your paper and a small storage pouch.

The Intuos Pro follows the classic design where you have all the shortcut buttons on the left and drawing area on the right. For those who are left-handed – You can simply rotate the device by 180° and change the settings to the left-handed mode in the driver settings.

The tablet feels very premium and sturdy in hand. It is made of brushed aluminum and has two large strips of rubber pads on the back.

There is a comfortable amount of extra space around the drawing area for your palms to rest. The overall drawing experience is very comfortable with everything working as smooth as you would expect.

The Intuos Pro comes with a scratch-resistant textured surface. It gives a slight resistance to your pen while drawing which makes them feel more controlled. The texture also makes the tablet feel and sound like a paper. It is one of those things which adds to your drawing experience.

Now all the tablets in the market come with some kind of surface texture but no one has been able to perfect the recipe. The texture on Wacom Intuos Pro is very well balanced. It is neither too aggressive nor too soft.

To further customize the feel of the tablet – the Intuos Pro comes with different types of pen nibs with have their own grip levels. In addition to that, you can also get addition texture sheets for the medium and Large models of the Intuos Pro which have more aggressive texture.

Wacom Intuos is the only tablet in the market that supports touch and multi-touch gestures. It enables you to perform various shortcuts such as zoom, rotate, pan and scroll. You can also use the touch in other applications or use the tablet as a big touchpad.

In case you do not want to use the touch feature – there is a button on the side of the tablet which lets you turn off the touch sensitivity.

A stylus is one of the most important parts of a drawing tablet. Some even consider it more important than the tablet itself. It does not matter how good the tablet is – if the stylus sucks, you will have a really bad time using the tablet.

With that said Wacom Intuos comes with the Pro Pen 2 which is Wacom’s most advanced stylus. It is arguably the best stylus in the market.

The pen comes with 8192 levels of pressure sensitivity along with ±60° of tilt sensitivity. It has two buttons on the side which are fully customizable through the pen settings. There is also an eraser at the back.

Like mentioned before not all the stylus with 8192 levels of pressure sensitivity are the same. The Pro Pen 2 has a very well balanced performance, the strokes made by the pen are straight with a nice taper at the end there is no sign of line wobble.

Similarly, the pressure of the pen is well calibrated and you will not get weird pressure bumps and other pressure inconsistencies.

Pro Pen 2 has a good ergonomic design which makes the pen feel comfortable to use for a longer duration. The pen has a wider front which slowly tapers towards the back. The front portion of the pen has rubber-like material which feels soft and gives more grip.

There are two types of pen nibs which come with Intuos Pro. The first one is the standard tip which is smoother and has less friction and makes less noise while drawing. The other type is the “Felt Nib” – it has more resistance and slightly more grippy feel.

There is a high-quality pen stand included in the box. The pen stand holds the pen while not in use. It can keep the pen in standing as well as horizontal position. It has a metal base which gives it extra stability.

There is a hole in the middle of the base plate which acts as a nib remover tool. Opening the base you can access the nib storage area where all the extra nibs are safely stored in padded compartments.

The buttons are clicky and give good feedback on pressing. To identify the button without looking, the button comes with raised dotted and dashed structures.

All the buttons are fully customizable and can be set to a different shortcut in the driver settings. You can also set application-specific shortcuts in which the shortcut buttons automatically changes depending on the application you are using.

Other than shortcut buttons the tablet also comes with a very handy touch ring. The touch ring enables you to perform shortcuts like zoom, rotate, pan, scroll and most importantly change the size of the brush and eraser.

It is a very handy feature and really helps during making artwork. The touch ring has a toggle button at the center which toggles between various shortcuts.

Wacom Intuos Pro connects to your computer in two ways

The Intuos Pro comes with a USB-c type 6.5ft (2 m) long cable which plugs on the right side of the tablet. It comes with an L-shaped connector which keeps the cable away from the working area.

Alternatively, you can connect your tablet to the computer wirelessly via Bluetooth. The tablet has decent battery life and lasts multiple days on a single charge. One important feature to notice here – unlike other tablets which boast of wireless connectivity, Wacom does not use any wireless receiver. Which frees up your USB ports and eliminates the possibility of losing the wireless receiver.

The driver allows your tablet to communicate with your computer. It also helps the computer to understand the pressure and tilt data. The driver for the Wacom Intuos is available at the Wacom’s official download page.

The driver allows you to make some basic as well as advanced settings like changing from right hand to left-hand mode and properly calibrating the tablet to your monitor screen. In addition to that, all the express buttons can be set to custom shortcuts.

You can also customize the button on the pen along with changing the pressure settings. On-screen shortcuts like radial menus can also be set as per your liking.

The Wacom Intuos Pro comes with a lot of accessories, some of them comes in the pack while others need to be purchased separately.

Which tablet should you pick – Small, Medium or Large? 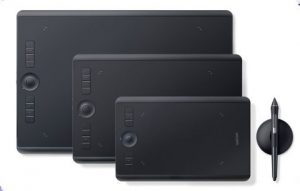 The tablet comes in three sizes small, medium and large. Now the question is how to pick the right tablet for you. Now some of you may say it depends on your budget and how much money you are willing to spend – which is right. In addition to your budget, the other important aspect to consider is your monitor size.

If you are using a laptop with around 15-inches display – then you would be fine with small or medium-size Intuos Pro. Otherwise, if your monitor is 19 inches or more then you should go for the medium or Large Intuos Pro.

Summary – is Wacom Intuos Pro worth the price

There are a lot of cheap devices in the market which tries to match the Intuos pro in terms of numbers and specs list. But a good tablet is not all about specs. What sets the Intuos Pro apart from all the other tablets in the market is its quality.

You may get a cheap tablet which costs half its price but after a couple of months, you would realize the drawing surface is getting scratched off and wearing apart. These things do not happen to Wacom tablets. In addition to that, the Wacom Intuos Pro is made of premium materials like aluminum.

These things combined with a very stable and updated driver makes the Intuos Pro lasts for years and that is why serious artists prefer it more than the cheaper alternatives.