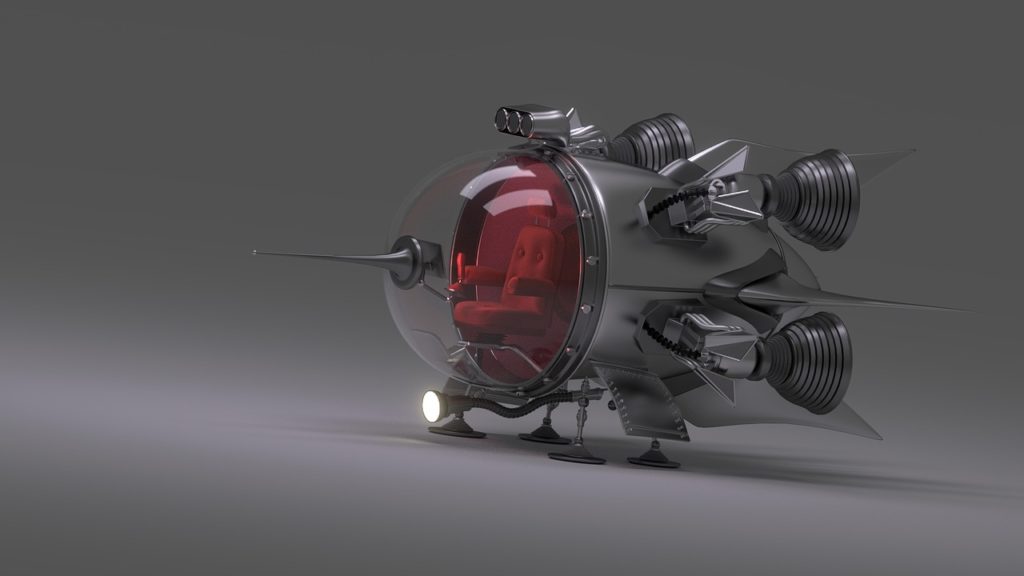 3D modeling has traditionally been a challenging task that always required powerful machines. Along with that, they needed complicated software and a lot of training and experience to use them properly. All these factors along with their costly software packages made it difficult as well as expensive to make 3D models in the past.

But now things have drastically changed. 3D Modeling applications are easier to use and more accessible than ever and even a complete beginner can easily learn to use them.

With the rapid growth in computing power and processors, new 3D apps for android and IOS devices are constantly showing up on the app stores. Some of these apps are really powerful and comparable to desktop-grade 3D applications.

Here is the list of the best 3D modeling apps for mobile and tablets which may be a gamechanger for you.

Many of the 3D applications available on the app store or play store are just 3D viewers where you can not make models from the scratch or make minute changes in the pre-existing models.

For the sake of this list, we have excluded all those 3D viewer apps and focused only on those apps which allow you to edit your models. By doing this we have eliminated most of the apps from our initial list and only a handful of really powerful applications remained.

The use of CAD (Computer-aided design) models has increased substantially in the past few years. They are being used everywhere from designing machinery to product development. It has also great uses in architecture and many other industries.

It is quite easy to learn and there are really powerful apps which make modeling and designing kind of fun. You can use these apps to create some hobby projects and 3D print them to show it off.

Onshape – All in one CAD design app for Android and IOS

Many of the android and IOS 3D applications are just viewers instead of modelers. Onshape is a full-blown CAD editing and modeling application which is the mobile version of the desktop-class web-based application. The application is made for professionals and has all the features you need.

Everything is interconnected with the cloud and it is very easy to switch from a laptop to an iPad or smartphone and continue working. You can also work in a team and control access to your files through the app. You can collaborate in various which includes screen sharing, updating in real-time, interacting via comments and much more.

The application updates on a regular basis and has hundreds of online tutorials and webinars. Moreover, the support team is ever ready to help you through anything if you feel stuck or confused.

The app has a minimalist, distraction-free design with the working area in the center and tools at the top. Simple functions like rotate, zoom and pan can be done through the gestures.

In a nutshell, it is possible to make a complete CAD file from start to finish in with pinpoint accuracy. Which makes it one of the most powerful 3D modeling app. Moreover, it can read, write, import or export many common CAD formats that are very handy. The app has a free version with limited features. 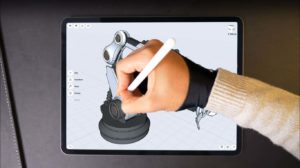 Most of the 3D applications available for tablets were initially made for desktops or as a web application, which down the line released their app versions. Now, most of these apps are not optimized for the mobile platform and have a lot of bugs. The overall user experience is not that great and modeling can feel tiresome.

Shaper 3D is the app which was specifically made for iPad from the ground zero. One of the main benefits is the app never feels bulky or freezes up, even while dealing with large file sizes. The app interacts great with apple pencil and has a lot of handy stylus shortcuts.

Everything is well integrated within the app. For example – when you want to watch some tutorial, you can find it within the app without opening any other application or browser.

The working area is totally clutter-free with the most important tools located on one of the sides. All the extra tools like snap to grid, guides or mirror is present at the corners – taking as less space as possible.

You get a decent level of customization on the layout. The app enables you to switch between right hand to the left-hand mode by simply dragging the tools to the other side.

The app uses the full potential of the device by using gestures and an apple pencil. To change views all you need to do is a double-tap or two-finger adjustment for more precise placement. The app recommends using apple pencil for modeling as it uses some of the features like pressure sensitivity to perform certain tasks.

Shaper 3D supports all the major file types such as X_T, STEP, IGES, STL, OBJ. The basic plan of the app is free to use but you get a lower quality export and certain other limitations. The full version of the app is available on a monthly or yearly subscription.

Sculpting is another way of making 3D models. It is mainly used for detailed character modeling. It is often used by professional 3D artists – they use this as a part of their workflow or make the whole model by sculpting itself.

Basically, it works like clay, you have set of different brushes to mold a basic shape into the desired form. It is easy to learn and with practice, you can make complicated-looking characters really fast. The 3D sculpting apps mentioned below are very powerful and have almost all the features you will find in a desktop-grade program.

Sculpting is another way to create complex 3D shapes. It is mainly used for character modeling for more natural and true to life looking characters. Professionals like to use sculpting as it is faster and has a more natural workflow with better-detailed outcomes.

Sculpting apps for iPads are were not that advanced and provided only basic sculpting tools, but that changes with Forger. The Forger is a surprisingly good app made for iPad and has almost all the basic as well as advanced tools and features.

If you are coming from desktop applications like ZBrush, you will find yourself right at home. The main aim of the app is to give all the tools in a portable, travel-friendly package.

The app allows you to work with layers, has a completely customizable brush system, baking, masking, re-symmetry, remeshing, subdivision levels, image references and much more.

Basically, it has everything you can ask in a mobile sculpting application. It also has a full set of texture painting tools as well as PBR(physically based rendering).

The Forger has very well acquainted itself to use the touch environment, it makes full use of multitouch and gestures as well as apple pencil. You can very easily import and export .obj objects and start working on it, which makes it very easy to be a part of your workflow. It is also one of the cheapest apps to buy and costs just a few bucks.

Android devices have been lacking in sculpting apps for a long time. There were only a few basic sculpting app for android which lacked a lot of key features. In the past few months, the things have warmed up a little with the release of Sculpt+. It is far superior to any of its other Android counterparts and has a lot of key features you will find in desktop class software like ZBrush and Mudbox.

The working area and the layout is cleaverly designed for working with small screens. You will find it comfortable to use the app on even smartphones. The app does not have any advance gesture shortcuts as of now. It uses basic touch to change the perspective and sculpt.

Talking about the layout – at the bottom, you can select between sculpting, painting or masking along with undo-redo buttons. In the bottom left portion, you can change the size and strength of the brush. There are 10 sculpting brushes available along with 10 different alphas.

Sculpt+ can easily import and export the models as a .obj and use them in any other programme. It can also import matcaps as well as alphas. You can easily work and switch between different layers and render the final image.

Overall the app is perfectly capable of making complex models and comes with all the basic tools you need. Sculpt+ is totally free to download.

Polygon modeling is a resource-intensive task and needs a lot of computing power and memory to work properly. In polygon modeling you get a basic shape such as a cube, you have to change that base shape into various objects by changing each individual face or edge.

It is slightly difficult to learn in comparison to CAD or sculpting. There are simple polygon modeling apps which will help you in the learning process. Once you get your hands on these apps, you can create anything you wish – from simple to complicated models.

The app supports gesture-based shortcut to navigate and perform simple tasks like zoom, pan and change perspective. SDF 3D has a simple layout with the working area in the center and menu at the top and bottom for mobile devices and left-right for tablets.

Some of the basic tools include extrude, intrude, subdivide, bevel, mirror, symmetry and many more. Other than that you can also copy, paste and undo-redo. It is a very powerful app and allows you to export your model for 3D printing.

In spite of all these features, it still feels like work in progress. The UI could be better and overall interaction does not feel that smooth. If you have used professional software like Maya or Cinema 4D, you will find some missing features. Overall it is the best Android has to offer. 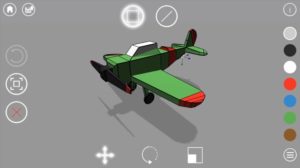 Sketch 3D is available for both Android and IOS devices. It is a medium level 3D application with basic tools. The UI looks primitive and the models are not so refined. The app works on hard poly modeling with solid edges. You get basic tools like move, scale and rotate for the edges and face along with additional features like extrude.

The files can be exported as obj format and 3D printed after some modifications. It is a simple app for learning or getting acquainted with polygon-based 3D modeling and does not has pro features for hardcore modelers.

3DC.io is one of the simplest modeling app available on Android and IOS devices. The app has a simple and compact toolset for beginners. It is simple to use and easy to learn and needs no prior experience. The app is also available as a web version (3dc.io) where you can model objects online without downloading or installing anything.

It has a very basic layout with the move, resize and rotate tool present at the bottom right-hand corner. On the bottom left you will find the basic shapes and option to import previous projects. You can also draw custom shapes and include them in your model.

Right beside that lies the color picker and menu tray. The menu tray has modeling tools like subtract, clone, group, cut and a few more. The app also has a community page where you can share your creations with others and check out what others are making.

Overall this application gives you all the basic toolset and mainly focused on beginners to understand the basic principles. It is also an ideal application for kids and already implemented in the curriculum of some of the very reputable schools.

Tilt sensitivity and rotation in Stylus : Do you really need it