A lot of movement is going on the drawing tablet space in the past few months. Big tablet brands are responding to the high demand for budget drawing tablets and releasing pen displays for beginner to intermediate users.

It started with industry leader Wacom releasing their Cintiq 16 display tablet, claiming it was the best option for beginners.

Soon Xp Pen followed with its Artist 15.6 Pro tablet which essentially blew everyone’s mind with its aggressive features. In addition to that, it was priced substantially lower than the already cheap Cintiq 16.

Finally, Huion showed up with its Kamvas Pro 16 which comes at the same price point as Xp Pen’s Artist 15.6 Pro.

With all these options it is easy to get overwhelmed with all the choices.

In this Huion Kamvas Pro 16 vs Xp Pen Artist 15.6 Pro comparison, we would take a deep look at all the feature these tablets have to offer. It will help you decide which display tablet is the right choice for you.

Here is the quick comparison between the Xp Pen Artist 15.6 Pro and Huion Kamvas Pro 16.

Both the tablet has a very similar design with the working area on the right and shortcut buttons on the left. The corners are rounded and you have bezels around the screen to work as a palm rest.

Now both the tablets are equally good in terms of build quality but the Huion Kamvas Pro 16 takes a slight edge over Xp pen. The Kamvas Pro 16 has a metallic body which covers the whole back. It wraps around the edges to meet the glass at the front.

A screen is one of the very crucial parts of a drawing tablet, it is where all the action takes place. As an artist, you have to work at close proximity of the screen, so it is very important for the tablet to have a high-resolution screen so that you don’t see small pixels.

The screen of these tablets are very similar to each other, they come with a 15.6-inch display with 120% RGB color coverage and a Full HD resolution of 1920 x 1080 pixels. These screens are bright enough to be workable in bright indoor environments.

Matte display and surface texture – The tablets come with a matte screen which minimizes glare. Both screens have a textured surface which helps with controlling your stylus better. The texture is a little different on each screen but it is very difficult to tell which one feels better.

Laminated display – Why do they matter

One of the biggest reasons why you should be excited about these two tablets is – they come with laminated displays.

So what is a laminated display and how does it improves the drawing experience?

Apart from that, one of the prime reasons for the use of laminated displays is they reduce parallax.

In older displays, when you draw a line the drawing cursor appears a few millimeters away from where the pen is actually touching the surface. This was caused by small gaps between the display layers. Laminated displays do not have these issues and the strokes appear perfectly where the pen touches the surface.

Both these styles are relatively new and started showing up with the last few tablet releases. Initially, Huion had some line wobble issues, where it was unable to draw straight lines. But since then a lot had changed and now they have successfully perfected their stylus. So which stylus is better?

Xp Pen P05R and Huion PW507 come with 8192 levels of pressure sensitivity. In addition to that – they also have tilt recognition up to ±60°.

As an artist, you often use these devices for multiple hours at a time. For making your drawing experience comfortable and minimizing hand fatigue and cramps, both these stylus comes with a very ergonomic shape. They have a wider tip while slowly tapers towards the end.

The pens have rubber grips at the front which helps with better grip. Both stylus has two buttons on the side with no eraser at the back.

Wacom Pro pen 2 is considered the holy grail for the stylus performance for the last few years. Both Xp Pen and Huion have come a long way from what they use to be. Their latest stylus Xp Pen P05R and Huion PW507 have the same level of accuracy from what you find with Wacom pens.

The lines are smooth and consistent with a nice taper at the end of strokes. The pressure curve is on point, tilt sensitivity works great. Both the stylus are passive pens which means you do not need to charge them.

So which stylus is better? All things considered – both Xp Pen Artist 15.6 Pro and Huion Kamvas Pro 16 have an equally good stylus with very similar performance.

The Huion Kamvas Pro 16 comes with a donut-shaped pen stand which allows you to keep the pen in horizontal as well as vertical position. The stand is made of plastic and feels a little cheap. Opening the pen stand you will find 10 extra pen tips stored in padded compartments along with a nib remover tool.

Now Coming to the Xp pen Artist 15.6 Pro pen holder. It is cylindrical in shape and contains storage space for the pen as well as extra pen tips.

Opening the front cap you will find the pen stored inside the cylindrical tube. The front cap also works as a pen stand which keeps the pen in a vertical position. It is bottom-heavy and has rubber pads at the bottom.

Overall XP pen has a better pen holder which provides better protection to the pen.

Artist Pro, as well as Kamvas Pro 16, comes with a number of shortcut options. All the shortcut buttons are located along the left side of the tablet. Here is the detailed look at all the expresskeys these tablets offer.

With Xp Pen artist 15.6 Pro, you get a total of eight shortcut buttons along with a very handy circular dial. The button has raised dotted and dashed structures to easily identify then in dark.

The dial is one of the most useful features which allows you to zoom, rotate, pan, scroll and most importantly change the size of your brush and eraser. The roller makes a satisfying click after every 15° of rotation and kind of invites you to use the shortcut button more often.

The shortcut button has the same raised dots that we have seen in other drawing tablets which helps to identify the button without looking at them. The button has a nice quality and makes a satisfying click on pressing. All the buttons can be customized using tablet settings.

Overall Xp Pen Artist 15.6 Pro has better shortcut options with more buttons. The dial feels a step ahead of the touch bar that is available with Huion. It feels more inviting and satisfying to use.

Both these tablets are relatively big, which means it can be difficult to use them flat on the table. A tablet stand gives you varying angles for a more comfortable drawing.

The Xp Pen Artist 15.6 Pro comes with a simple plastic stand which has a single adjustment angle. Huion, on the other hand, does not come with any tablet stand. They recommend using their official tablet stand for Kamvas pro 16 (Amazon) which is available separately.

Connectivity options – How to connect with a computer

Both the tablets use a 3 in 1 cable to connect the drawing tablet to the computer. This minimizes cables coming out from your tablet and makes your setup look clean.

On the opposite side, you have a USB type-c cable that connects to the drawing tablet. The Huion Kamvas Pro 16 comes with an L-shaped USB-C cable which whereas the Xp pen Artist 15.6 Pro comes with a straight cable.

This option is not available with Huion Kamvas Pro 16 whose power connector is circular in shape and cannot be connected to the computer.

In case you don’t know – a driver is a software that helps the computer to understand the tablet data like pressure and tilt sensitivity. It also gives you access to advance settings to fully customize your tablet. It allows you to change all the shortcut buttons on the tablet as well as the pen and also change the sensitivity of the pen.

Both the tablet come with their own driver which is free to download. The drivers are easy to navigate and use.

Huion and Xp Pen are known to give a generous amount of extra accessories with their tablets. Here is the list of everything you’ll find in the box.

Both Kamvas Pro 16 and Artist 15.6 pro are similar to each other in price, design, features, and capabilities and we have to really look hard to find major flaws considering how good these tablets are. In the end, both these tablets are great choices and you cannot go wrong with any of them. 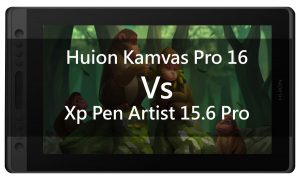 The Huion Kamvas Pro 16 (Amazon) has a better-built quality, on the other hand, the Xp Pen Artist 15.6 Pro (Amazon) has better shortcut buttons and comes with a tablet stand. Other than that, their display is equally good and they have a similar level of pen performance.

So at this point, we are not really talking about the tablet and pen as we know they are equally good. You should select the tablet based on which brand you prefer and whether you want a better design or better shortcut options.