When you are looking for a drawing tablet you ideally want a tablet that provides the most amount of features at least possible price. 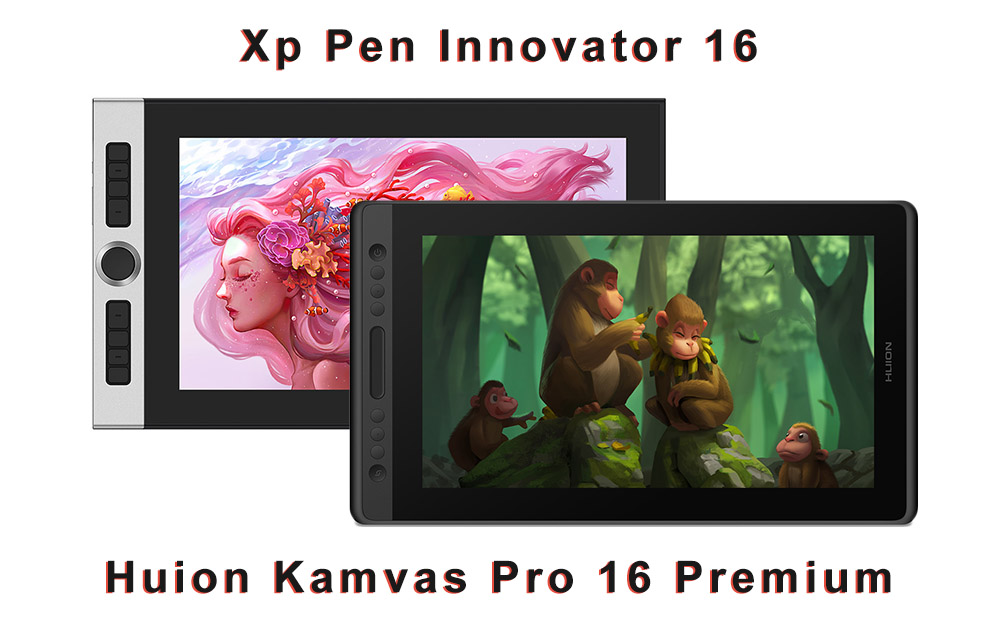 Huion and Xp Pen are two popular brands that are known for their “value for money” drawing tablets. They have recently come with their brand new display tablets.

The Xp Pen Innovator 16 and the Huion Kamvas Pro 16 Premium are two of the best 16-inch drawing tablet in the market right now. Both the tablets are upgraded versions of their previous models.

While the Xp Pen Innovator 16 has considerably better features and a very premium built quality. The Huion Kamvas Pro 16 (premium) comes with a superior display and an all-metal design.

So the obvious question is – Which if the two devices provide a superior drawing experience? and Which tablet you should get as your next drawing tablet.

These are some of the questions we will be answering in this Xp Pen Innovator 16 and the Huion Kamvas Pro 16 Premium comparison.

Before we move on to comparing all the features in detail, here is a quick look at all the important features Xp Pen Innovator 16  and the Huion Kamvas Pro 16 Premium comes with.

If all these nerdy numbers do not make any sense to you. Don’t worry, we will explain each of them in detail.

The Xp Pen Innovator 16, as well as the Huion Kamvas Pro 16, comes with a very similar – modern and minimalist design. They have the screen on the right and shortcut buttons towards the left.

It allows the artist to draw with their right hand and use the shortcut button with their left hand simultaneously, without breaking the flow.

The tablet can also be changed into the left-hand mode for left-handed artists.

Talking of color choices – the Huion Kamvas Pro 16 comes with a matte black color, whereas the Xp Pen Innovaotor 16 has a two-tone silver and black color combination.

Both the tablets come with an all-metal design with rounded corners and beveled edges, which feels very premium.

Both the tablets have a very similar form factor but the Innovator 16 is considerably thinner. It is so thin that holding it first in the hand people may assume it does not come with a screen.

The missing feature of the Innovator 16

On the back of the Huion Kamvas Pro 16 and 16 premium, you would see 2 large rubber strips located on both sides of the tablet.

This rubber strip helps the tablet with getting a better grip on smooth surfaces, especially when you are using it flat on the surface.

Xp Pen Innovator 16, on the other hand, does not come with any rubber pads at the back. This may result in the tablet slide around on smooth surfaces, which is not ideal.

The display is one of the most important parts of a drawing tablet. This is what determines the overall size and cost of the tablet.

A smaller entry-level tablet may be very cheap but it may not provide the same drawing experience as the larger one. On the flip side, a larger drawing area may be too large for some people and too expensive to afford.

A mid-size 16-inch drawing tablet is one of the most common sizes for drawing tablets. As it has a sufficiently large screen to freely flick your hands around and it is compact enough to move it from one place to another.

In addition to the size, the resolution, and the color accuracy of the screen is also important. 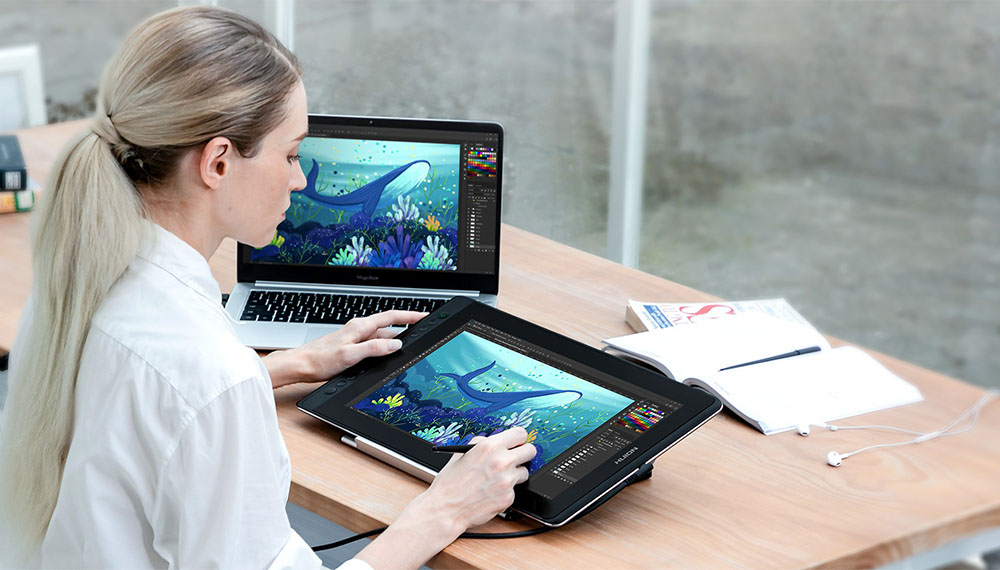 Huion Kamvas Pro 16 premium also comes with a 1920 x 1080p resolution and has a higher color accuracy of 150% sRGB – which is results in better picture quality compared to Innovator 16.

Digital art and graphic designing is a color intensive task, where you have to make a number of creative decisions based on the colors.

So it is very important for the tablet to come with screens that have superior color accuracy that shows current colors and can be relied upon.

A normal monitor generally comes with a <100% sRGB color coverage, comparing that with what we are getting in these two drawing tables (which is 125% and 150%), you can easily say that you are getting – way better color accuracy with these displays.

As far as the resolution is concerned. A FullHD 1080p resolution a 15-inch display is sufficient and produces very sharp images. 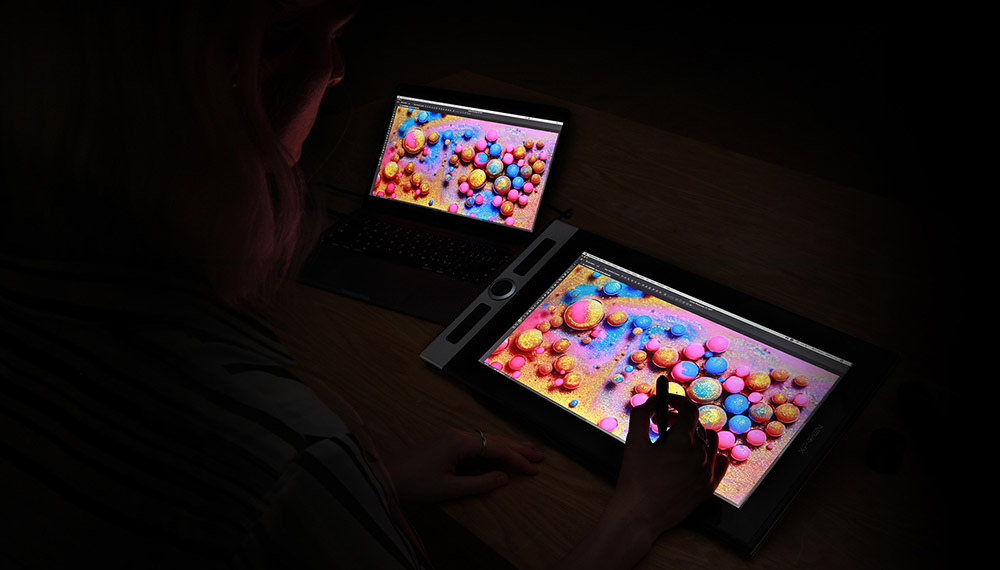 Unlike a tablet or a laptop, a drawing tablet is mostly meant for indoor usage – so they can get away with lower brightness levels.

The screens of both the tablets are sufficiently bright to see the contents of the screen in a bright indoor environment.

Both the Innovator 16 and the Kamvas Pro 16 premium comes with a textured screen with a matte finish.

The matte screen improves visibility by reducing glares and reflection off the screen.

While the textured surface introduces minute irregularities on the screen which stops the stylus from slipping around on the smooth glass surface. It results in better control over the stylus and ultimately a better drawing experience.

For the textured and the matte effect, the Xp Pen Innovator 16 uses a thin plastic film on top of the screen.

The Huion Kamvas Pro 16 comes with an AG glass (anti-glare). In AG glass, the texture and matte effect is introduced directly on the glass itself. It results in a better scratch resistance than the Innovator 16.

Laminated display – how it helps

A laminated display is essential to limiting parallax. Parallax occurs when a line is drawn by the stylus is off by some millimeters from the point of contact between the pen and surface.

Thankfully, both tablets come with laminated displays. You, therefore, do not experience parallax while drawing.

A stylus plays an important role in the overall drawing experience of the tablet.

When it comes to the stylus for drawing tablets – Wacom Pro Pen 2 is considered the best stylus by most of the artists.

But the Wacom Pro Pen 2 has not changed/improved at all in the last few years. Meanwhile, other brands such as Huion and Xp Pen have taken a huge leap in terms of the overall quality and performance of their stylus.

At present, the stylus from Huion and Xp Pen is just as goods as Wacom and provides a very smooth and consistent drawing experience.

All these above-mentioned styluses are battery-free EMR based stylus which does not work on batteries and thus does not need to be charged.

The stylus of Huion and Xp Pen has a very similar shape. They are wider towards the tip and slowly decrease in width towards the back.

This ergonomic design makes the stylus comfortable to hold on long drawing sessions.

These styli have two shortcut buttons on the side with no eraser at the back. The front half portion of the stylus has rubbery material (probably silicon) that provides excellent grip, especially on sweaty hands.

Both the Xp pen PA5 and Huion PW 507 stylus have 8192 levels of pressure sensitivity and ±60° of tilt sensitivity.

Xp Pen Innovator 16 comes with a high-quality cylindrical pen case. The pen case doubles up as a pen stand and has a storage compartment at the back to store extra pen-nibs.

The Huion Kamvas Pro 16 Premium comes with a donut-shaped pen stand. This pen stand can hold the pen in vertical (standing upright) or horizontal (laying flat) position. It also has a small storage space at the back to store extra pen nibs.

Drawing Performance of the stylus

Both the stylus provides an equally good drawing experience. They have a very accurate pen tracking and their pressure sensitivity is also very balanced.

The lines drawing by them are very consistent and do not have any pen jitter issues (wavy lines), or unexpected pressure bumps – which is great.

Shortcut buttons are a very handy tool. They provide quick shortcuts for redundant tasks such as zoom, grab, color selection, undo-redo, etc. – which improves your workflow.

These buttons are fully programmable and can be set to any shortcut of your choice in the tablet settings.

Multishortcut interface allows you to easily perform advanced operations such as zoom, scroll, pan, or change the size of brush and eraser.

The Huion Kamvas Pro 16 (premium) comes with a touch bar. For performing these advanced shortcuts all you need to do is swipe up or down on the touch bar.

The Xp Pen Innovator 16, on the other hand, comes with more advanced and user-friendly setup. It has two set of multishortcut dial located in between the shortcut buttons on the left side of the tablet.

The first dial is a physically rotating ring, which needs to be rotated left or right to perform shortcuts.

The second shortcut dial is a touch-based dial on which you need to drag your finger in clockwise or anti-clockwise motion to perform shortcuts.

Both the tablets come with a free tablet stand – but there is a huge difference in the quality of the included tablet stand.

The Xp Pen Innovator 16 comes with a pretty cheap-looking generic tablet stand. It is totally made out of plastic and has a single standing angle.

Whereas Huion Kamvas Pro 16 comes with a high-quality metallic tablet stand. The stand is very sturdy and has a total of 6 adjustable angles.

In terms of connectivity, both tablets come with nearly identical set-ups. You get a 3-in-1 cable in either model that connects you to a computer. The 3-in-1 design means that you have a cleaner table as you won’t have multiple cables littering your working surface.

In order for your tablet to work properly, it is essential that you install the driver. The driver communicates with the computer and helps it understand the pressure and tilt data.

It also gives you full control of the tablet – allowing you to customize the shortcut buttons and adjust the pressure sensitivity of the stylus.

What’s included in the box

Here is the list of everything that is included in the box.

Summary – Which is a better drawing tablet?

From the comparison, we have seen that – there are a number of overlapping features in both the tablets. This makes it even more difficult to pick one table over the other.

So we recommend that you make your final decision based on the following factors.

Although the screens of both the tablets are very similar – the Huion Kamvas Pro 16 premium takes the lead.

The Kamvas Pro 16 Premium comes with higher color accuracy and uses the AG glass instead of plastic film (that you get with Innovator 16) which provides better scratch resistance and a superior drawing texture. The Kamvas Pro 16 also comes with a better tablet stand.

The Xp Pen Innovator 16 is – kind of a more practical tablet. If you are someone who prefers to use shortcut buttons you will love the dual multi-function dial present on the tablet. It massively improves your workflow. Also, it is one of the slimmest pen tablets in the market.

Also – even though the stylus performance on both the tablets is equally good. But the Innovator 16 stylus feels better in hand due to its superior built quality.

Comparing the two tablets with other options available in the market – it is clear that Xp Pen Innovator 16 and the Huion Kamvas Pro 16 premium are two of the best mid-range drawing tablets in the market.

So no matter which tablet you pick – you are already getting the best of the best tablet. On top of that, their pricing is also reasonable.