Digital pens are getting better year after year. Wacom’s patented EMR technology has been at the forefront of all those improvements.

EMR stands for Electromagnetic Resonance. EMR powered digital pens are more common than you think. This technology could be seen in stylus from all the major brands such as Samsung, Microsoft, Dell, Wacom, etc.

The key feature of these EMR based pens is – they do not have batteries inside. So how do they work and where do they get their power from, that is what we will learn in this EMR based Wacom stylus breakdown.

This is a simplified breakdown of the working of EMR pens, we have provided some useful links at the end of the article for those who want to dig deeper. 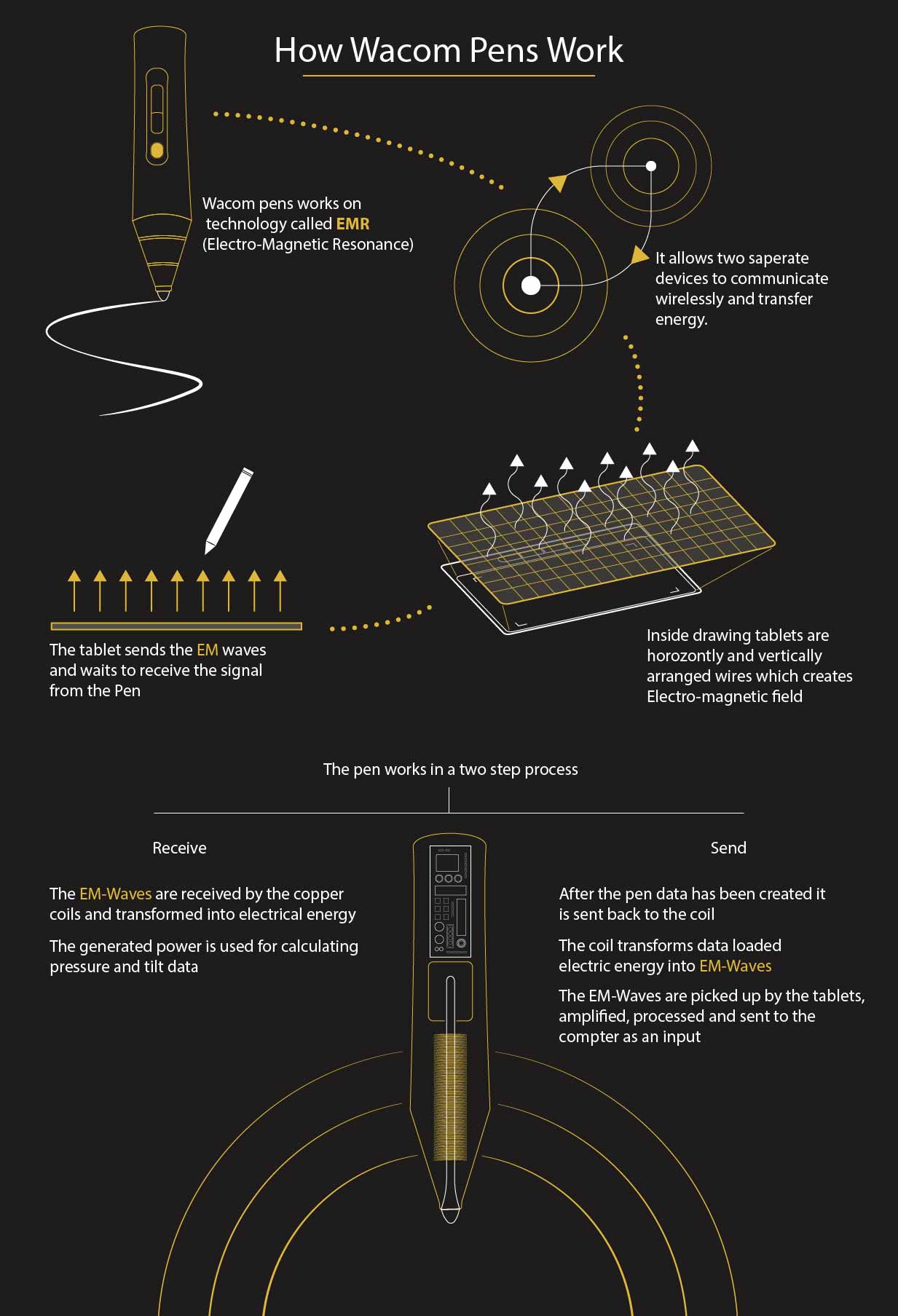 The pen gets its power using EMR (Electro-Magnetic Resonance) which is a fancy way of saying “it receives its power from the tablet”.

Inside the stylus, there is a coil of wire which picks up those electromagnetic fields and transforms them into electrical energy. Kind of similar to how wireless chargers convert EM-waves into electric power.

The generated electrical energy is then used to record the pressure, tilt and other data(Button clicks). The generated data goes back to the coil and gets converted into waves that get picked up by the tablet.

Breakdown – The technology behind

The EMR based stylus works by wireless transfer, conversion, and detection of electromagnetic waves. The surface of the tablet is responsible for sensing and receiving EM-Waves, and the stylus is responsible for recording pressure data and sensing it back to the tablet.

Opening the tablet you would find horizontal and vertical wires making a grid pattern and running across the surface the tablet.

These wires send electromagnetic waves which are picked by the stylus when it comes near the surface of the tablet. 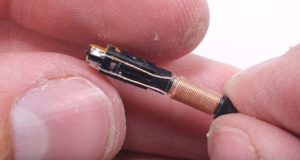 The pens have copper coils near the tip which receives the waves and transforms them into electrical energy. This energy is used to record pressure signals and button presses which are then transmitted back to the tablet in the form of EM-waves.

All these processes are controlled by a set of microcontrollers and capacitors present on the stylus.

Next, the tablet receives the data from the pen and further processes it along with the pen position and tilt data to ultimately produce results that we see on the computer.

This whole transfer and receiving the waves is performed in two steps. After every transfer of EM-Waves the tablet waits for a receiving signal from the pen. This is what constitutes one cycle. To accurately measure the pressure and position of the stylus this whole cycle repeats a couple hundred in a second.

Emr stylus does not need to be charged at repeated intervals. They can be used whenever you want and for whatever period of time, without worrying about recharging them.

These pens do not have any moving parts which flex over time and damages the circuit. The battery inside most of the pens degrades over time and negatively affects their usability. The batteryless pens prevent all these issues by excluding the battery itself.

The EMR technology gives overall a better performance due to a very high number of data points and fast communication. Its output is more consistent and smooth. The pressure curve is accurate even at the lowest levels giving near-perfect readings and output.

How much does a drawing tablet cost? Are they expensive?