Apple Pencil is one of the most advanced stylus in the market that seamlessly integrates with the iPads to produce pencil-like results. 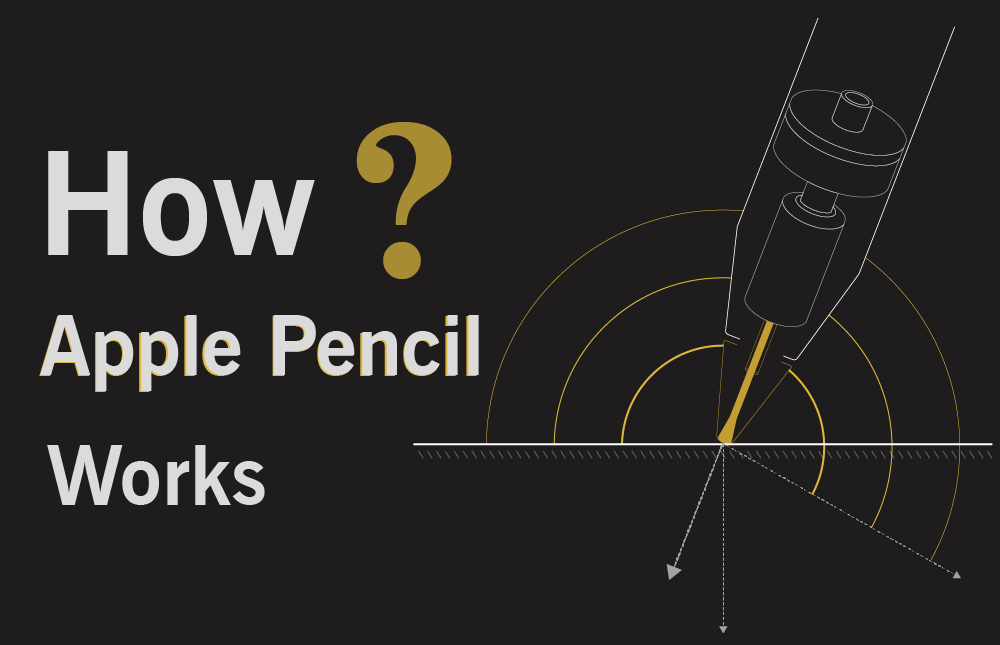 Looking at the Apple Pencil in action, it is amazing how it manages to produce realtime, smooth, and consistent strokes with pinpoint accuracy. This has persuaded many professional artists to permanently switch from traditional drawing devices to the Apple Pencil and iPad combo.

All these cool features make you wonder  – How does Apple Pencil actually work? and how it is different from the other styles in the market?

From the outside, Apple Pencil may seem like a simple stylus but things get really interesting once we start to uncover all the layers and try to understand what is going on inside.

After spending weeks – going through dozens of patents filed by Apple and researching on topics such as gauges, axial and radial forces, capacitance, detection and reading of signals, we are finally here with a full explanation of how does an Apple Pencil works.

For minimizing technical jargon and making things easier to understand we have simplified everything with the help of infographics.

How does Apple Pencil work?

The Apple Pencil works in conjunction with the pen-enabled surface of the iPad. They measure and collect location, pressure, and orientation (tilt) data which is then combined together to produce the pen output.

Types of data required for the functioning of Apple Pencil

The pen-enabled surface of the iPad is responsible for tracing the movements of the Apple Pencil.

The surface of the iPad is specially designed to accept both the stylus and hand input. These dual input displays are simply absent in the other apple devices such as iPhones or macs which makes them incompatible with Apple pencil.

Tracking the path of the stylus over the surface of the tablet works by scanning and recording the location of Apple Pencil about 240 times in a second.

The more scans results in more accurate pen tracking information. For that reason, the iPads scans twice as often when you are using the stylus (Apple Pencil) compared to when you are touching the screen with fingers.

Pressure sensitivity is an important part of the Apple Pencil. It is responsible for changing the width of the strokes depending on how hard you press the stylus. It results in a more natural drawing experience.

The Apple Pencil is responsible for measuring the pressure applied on the surface by the stylus. The data is then processed and sent wirelessly to the tablet.

Measuring the force applied by the stylus is trickier than it looks. A stylus needs to be able to sense the exerted force from multiple axes rather than just measuring perpendicularly. 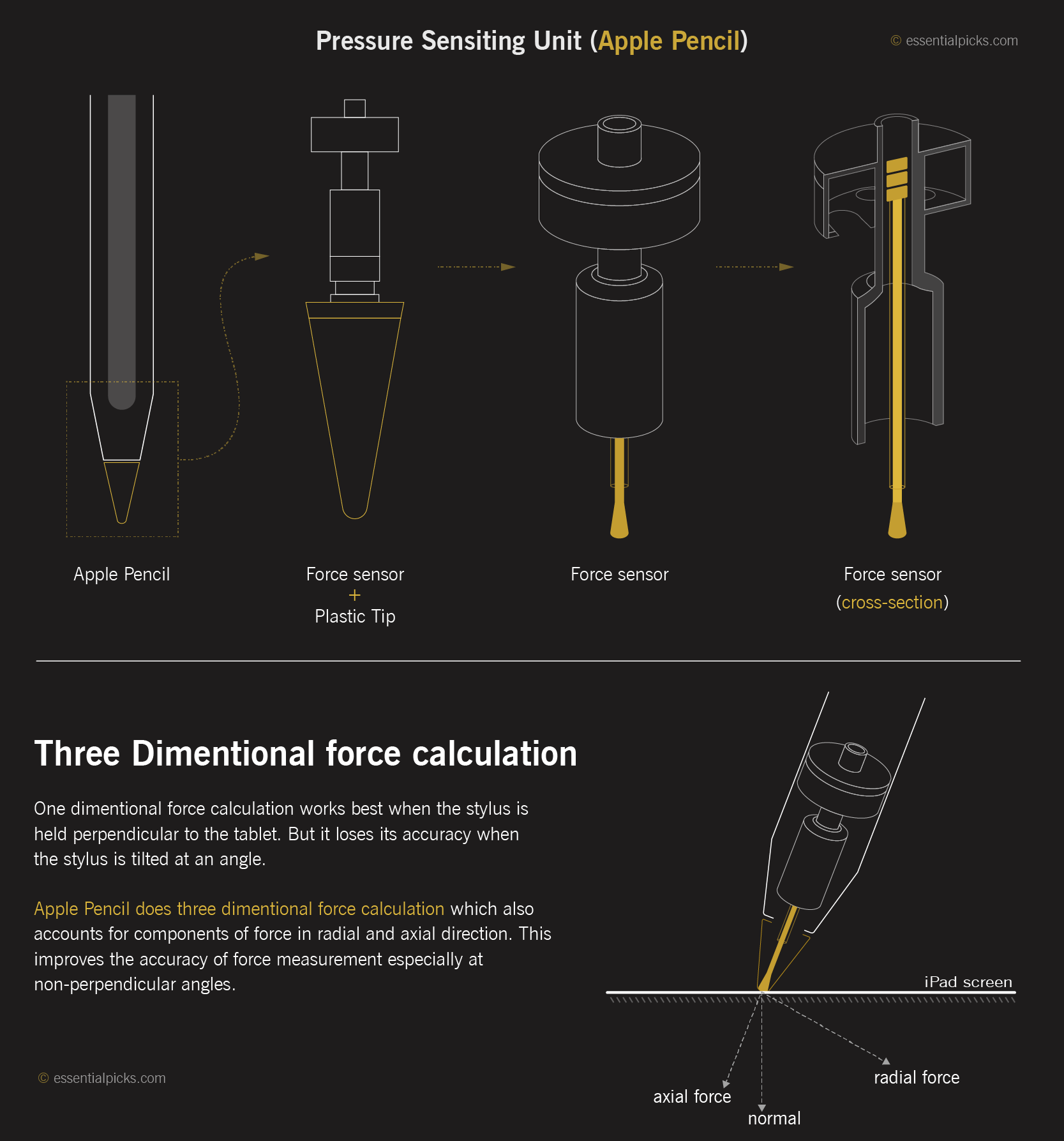 For that, the Apple Pencil uses a multiaxial force sensor to measure the force exerted by the user in both the axial and radial direction. This allows the stylus to take accurate force measurements irrespective of whether the stylus is held straight or at non-perpendicular angles.

Measuring the angle of tilt (orientation)

So far we have learned the tablet does the most of the work of tracking the stylus and the Apple Pencil handles the majority of work when it comes to pressure sensitivity.

The measuring of tilt is different because it requires the active involvement of both the Apple Pencil and the iPad.

The tilt data is then used to affect the width and darkness of a resultant line resulting in a more natural pencil-like behavior.

An in-depth explanation of how tilt sensitivity works 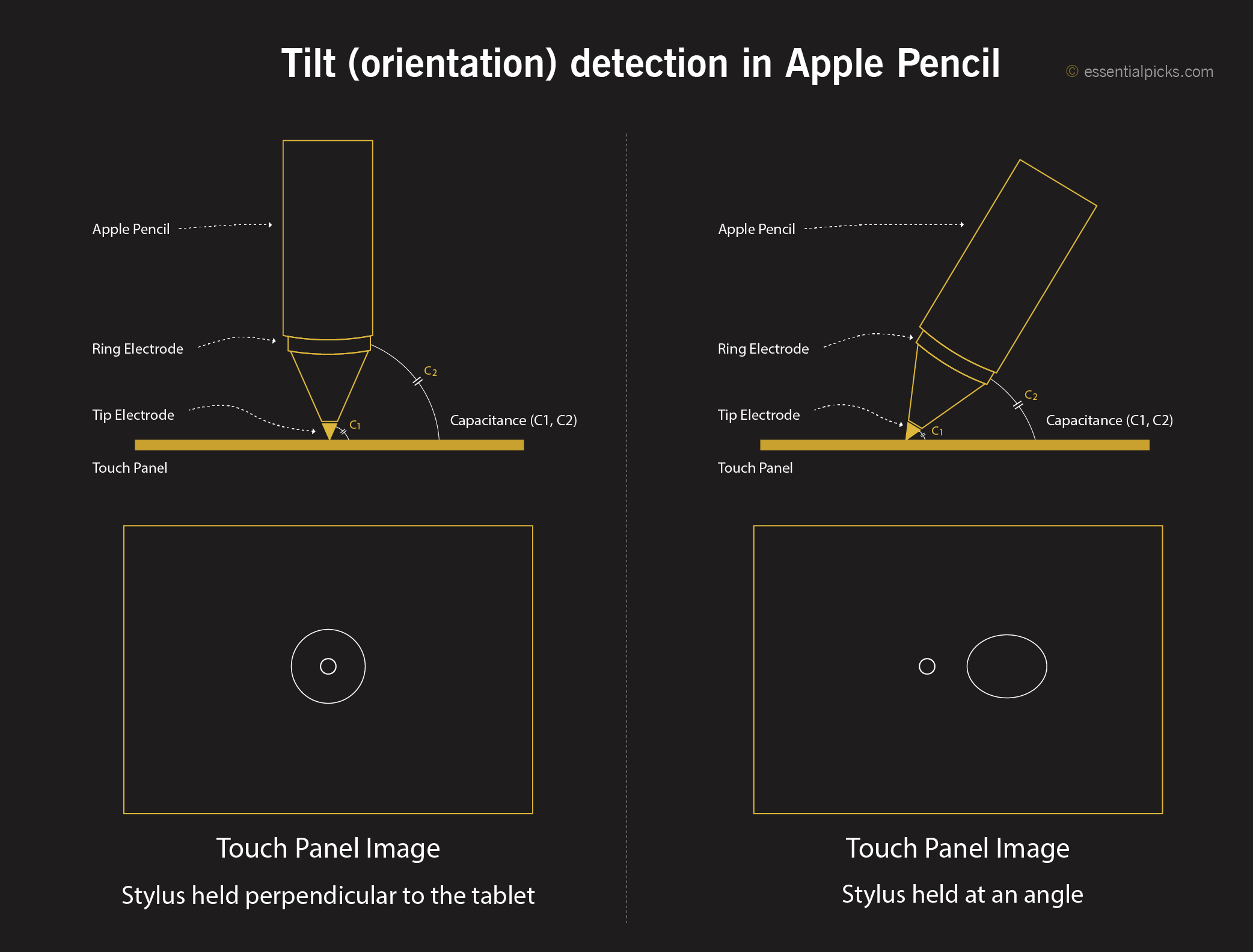 The front portion of the Apple Pencil consists of two electrodes, one at the tip called tip electrode, and the second electrode is located slightly above the first one called the ring electrode.

Why does the apple pencil not work with iPhones?