Looking for a new drawing tablet is never an easy task, you want to make sure that you are getting the absolute best drawing device.

The last few years have been great for digital artists as the quality of drawing tablets has massively improved along with a sharp decline in their price range. Meaning you can get better tablets at cheaper prices.

The artists who wanted a bigger drawing tablet were most to benefit – as it was possible for them to get large drawing tablets without shelling out a couple thousand bucks.

Right now the Huion Kamvas Pro 22 and the Xp Pen Artist Display 22R Pro are the two best – large size budget drawing tablets in the market. So if you are looking at these tablets and can’t decide – which one to buy, you have come to the right place.

To be honest, both Kamvas Pro 22 and Artist Display 22R Pro are very similar to each other and you are already getting a good deal with either one of them.

Still drawing tablets are long term commitment and we want to make sure you get the perfect tablet with all the features you are looking for.

In this Huion Kamvas Pro 22 and Xp Pen Artist 22R Pro comparison, we explore the features and differences between these two drawing devices and help you decide which tablet is a better fit for you.

From the first look, both the tablets look kind of similar. With a large screen at the center and a number of buttons on either side. Their dimensions and weight are also the same measurings about 570 x 334.8 x 44.8mm (L x W x H).

The differences start to appear when you look closer. The Huion Kamvas Pro 16 has a more modern, muted and minimalistic design with its shortcut buttons slightly recessed and a narrow touch bar on both sides.

The Xp pen, on the other hand, has a traditional button which is slightly raised above the surface.

Both the tablets are made of high-quality plastic and feel strong and sturdy. There is no flex or creaking sound when pressed. The matte black finish on the surface does a nice job of keeping the tablet clean and avoid fingerprints.

In older displays, the pen-enabled top glass layer was stacked slightly above the actual display. This slight gap in-between the two layers resulted in parallax.

In parallax, the cursor or the strokes appear to be a few millimeters away from the point where the pen is actually touching the surface.

In laminated displays, the different layers of the screen are laminated together in a single sheet of glass. This helps with minimizing parallax and also improves the image quality of the display.

The tip of the stylus is made of plastic and when a plastic stylus is used on a glass screen, it tends to slide a little too much. To counter this, some microscopic irregularities are introduced on the top surface of these displays in the form of texture.

The textured surface provides friction to the stylus which stops the pen tip from sliding too much and gives you better control over the pen.

It also provides a pleasing feel and that grainy sound that kind of mimics the sound of pencil on paper when drawing.

To achieve this texture the Huion Kamvas Pro 22 uses an etched glass whereas the Xp Pen uses a textured plastic film.

The textured on Xp Pen is basically a plastic film with texture on it. The film tends to lose its texture after a few quarters of heavy uses but on the bright side, it is easier to replace the film when it gets old.

A reflective screen easily catches light from ceiling light or windows and reflects them right into your face. Next, you find yourself fiddling around with your tablet for a better, non-reflective drawing angle.

To counter this, both Huion Kamvas Pro 22 and the Xp Pen Artist 22R Pro screens have anti-glare and anti-reflective properties. Making your drawing experience comfortable and enjoyable.

Drawing tablet Stylus has been getting better year after year. Nowadays it is kind to difficult to find a bad stylus in any recent drawing tablet.

The Kamvas Pro 22 comes with Huion PW500 stylus whereas Xp pen Artist 22R Pro comes with Xp Pen PA2 stylus. They both are recently introduced stylus and have 8192 levels of pressure sensitivity along with ±60° of tilt recognition and a fast response rate.

In terms of actual drawing performance – these two styluses are comparable to any other leading stylus in the market. Their pressure sensitivity is well balanced along with a really good stylus tracking and faster response time.

Both Huion PW500 and Xp Pen PA2 are battery-free (passive) stylus and do not needs charging.

The PW500 and PA2 share the same design language as well. They have similar width and comparable dimensions. They come with an ergonomic shape which makes them more comfortable to use on long drawing sessions.

The front half of both the stylus has a soft silicone material that helps with a better grip and the rest of the stylus is plastic.

Buttons on the stylus – Both the stylus comes with 2 side buttons with no eraser at the back.

Huion, as well as Xp Pen, comes with a dedicated pen holder for the stylus. However, both these pen holders are different from each other.

The Huion Kamvas Pro 22 comes with a doughnut-shaped pen stand. It can hold the pen in a horizontal as well as in a standing position. Opening the pen stand you would find 10 spare nibs safely stored in padded compartments. The storage space also houses a nib remover tool.

The front cap of the pen stand works as a pen and holds the pen in standing position. Opening the rear cap of the pen holder you would find 8 spare nibs and a nib remover tool.

Other than the cylindrical pen holder, the Xp Pen also comes with a small plastic pen slot. The Pen slot can be attached to the side of the tablet with the help of screws. Once in place, the pen slot can be used to hold the pen while it is not in use.

Shortcut buttons on the tablet

Shortcut buttons are important as they allow you to make quick changes without reaching your keyboard. They are also great for repetitive shortcuts such as undo, redo, selecting colors, pan, zoom, etc.

Now, most of the tablet comes with around 4 to 8 shortcut buttons which lead to many artists using the keyboard as their workflow and art style require them to use multiple shortcuts at a time and these 4, 5 buttons are just not enough.

The advantage with a larger drawing tablet is you have a lot of space to play with and both Huion and Xp Pen have wisely used the large size of the tablet by placing not 10, not 15 but a massive 20 Shortcut buttons.

These 20 buttons are present on either side of the screen with 10 buttons on each side.

20 Buttons do not only give you a massive number of shortcuts but also – in most cases – eliminates the need for a keyboard during drawing.

On both tablets, all the buttons can be programmed to any shortcut of your choice with the help of driver settings.

The shortcut buttons on Xp Pen have raised dots and dashes which makes it easier to identify without actually looking at the buttons. On the other side, the buttons on the Huion Kamvas Pro 22 all look and feel the same with no visual or physical distinction.

Other than shortcut buttons, the Huion Kamvas Pro 22 has two “Touch Bars” located in between the buttons on either side of the screen, whereas on Xp Pen you get two “Rotating Dial“.

Now comparing the Huion’s Touch Bar with Xp Pen’s Rotating Dial. Both of them basically do the same thing but the Xp Pen’s Dial is more satisfying to use as it physically rotates and makes a nice click sound every 15 degrees, giving you a nice physical and audible feel.

Other Buttons – There are 5 more buttons present on the top-right edge of both the drawing tablets. These buttons are used for changing the brightness, color and contrast settings as well as powering on/off the tablet.

These 5 settings buttons on Xp Pen are touch-based whereas Huion has physical buttons.

Both Huion and Xp Pen comes with a pre-included tablet stand in the box.

The Huion comes with a very functional tablet stand that you can attach to the tablet. The stand allows you to place the tablet at any angle between 20° to 80°. It has a strong-hold and rubber pads on the feet which keeps the tablet stable.

The Xp Pen Artist 22R Pro comes with a redesigned stand that is pre-attached to the tablet. The stand has a large, easy to access lever to easily lock and unlock the tablet in the right position. This stand also gives you around the same adjustability ranging from 16° to 90°.

There are large rubber pads on the stand as well as the tablet itself which firmly keeps the tablet in place along with protecting the bottom edge of the tablet. 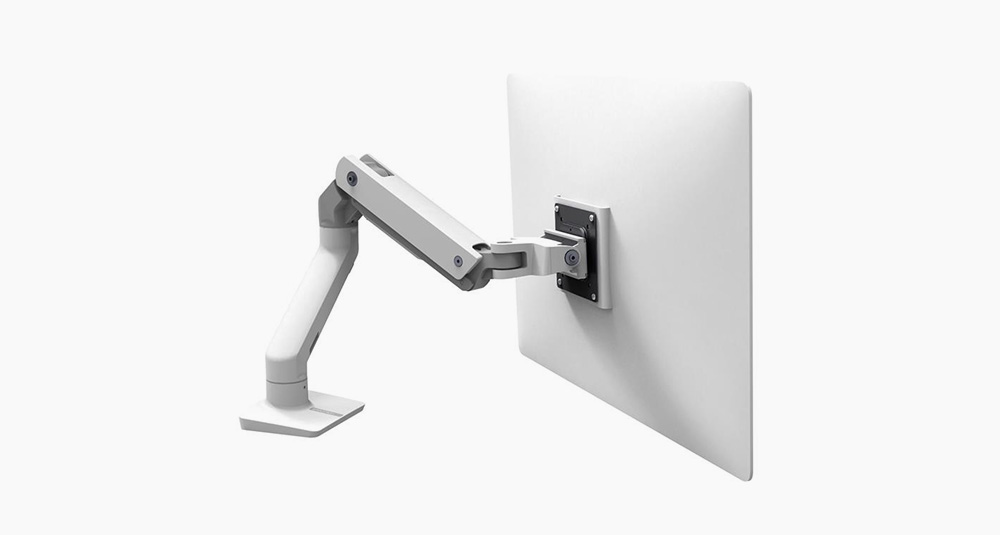 Xp Pen Artist 22R Pro and Huion Kamvas Pro 22 Pro have a standard VESA mount at the back which can be used to mount them on a monitor arm for greater flexibility. The VESA mount on the Xp Pen tablet can be accessed by removing the preinstalled tablet stand.

The port on the Xp Pen is more versatile as it comes with a USB Type-C port. This allows you to connect the tablet to the newer laptops with USB-C ports.

With the help of thunderbolt 3 USB-C, you can connect the Xp Pen Artist 22R Pro to a computer with just a single cable without needing any HDMI connection (You need to connect the DC cable though).

On top of that, there are two USB-A ports that you can use to connect a mouse or any other device such as an external hard drive directly into the tablet.

The port selection on Huion Kamvas Pro 22 is not bad either. It also has a large selection of ports that allow it to connect it to any computer. In case you have a newer laptop with USB-C Thunderbolt port, you can get a USB Hub on Amazon to connect your tablet.

Accessories – What’s included in the Box

Here is the list of everything that comes in the box.

Summary – Which is the right tablet for you? 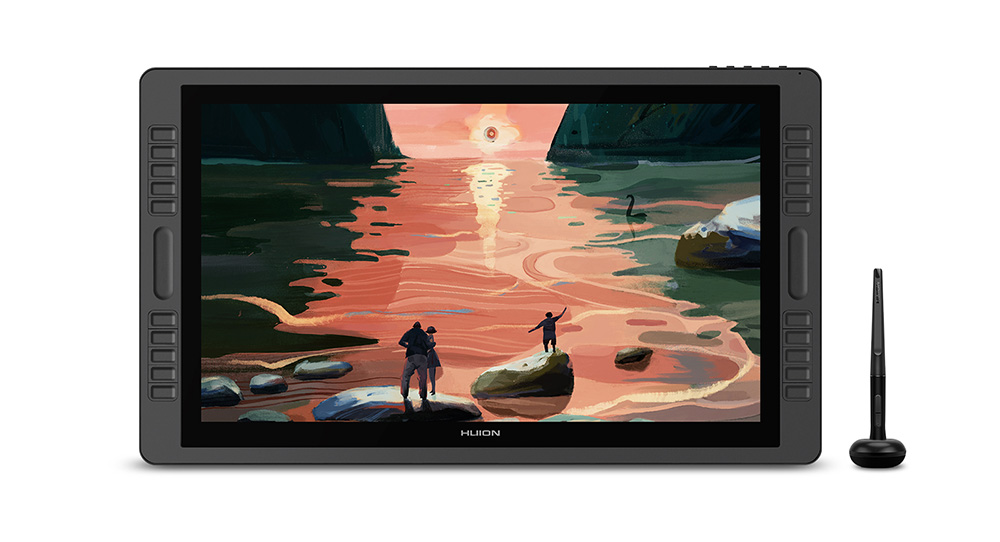 Display and the Stylus are the two most important components of a drawing tablet. The Huion Kamvas Pro 22 and Xp pen artist 22R Pro both have a similar display with 1080p resolution, 120% sRGB color space and a laminated screen.

Similarily their styluses are also very similar in terms of specs and performance. Meaning as we said before, you are already getting a great drawing device no matter which tablet to pick.

The main difference between these tablets is the Huion Kamvas Pro 22 (Amazon) has a slightly better build quality as it comes with etched glass, also the tablet itself looks much cleaner and modern compared to Xp pen.

The Xp Pen Artist 22r Pro‘s rotating Dial is much better than the touch bar on the Huion. Also, the tablet stand of the Xp pen is easier to access and more convenient to shift from one drawing angle to another. In other words, the Xp Pen is a more practical tablet.