Projectors are being developed for a long time and they have come really far from what they used to be. Starting off with the slide projectors, which worked by inserting a slide or a frame in front of bright light to get an image.

Then came the overhead projectors which could project printed images. Finally came the digital LCD Projectors introduced by Gene Dolgoff. They were far superior to older technologies and could read and display digital image and video files.

Over the years as the technology improved a new type of digital projector called DLP projectors were introduced. In this article, we would take a look at – how all these projectors work and how LCD, DLP, Laser and Lamp projectors are different from one another.

How do Slide Projectors work

Slide projectors work using a transparent sheet of glass with printed/painted images on them. When a strong source of light passes through the slides, it forms a magnified image.

The magnification and focus is controlled using different set of lenses. Here is the simple diagram of how they work.

These projectors could display black-and-white as well as colored images.  They used a rotary tray to store the slides and you had to manually put them in and out of the projector.

These were mainly used in office, exhibition, laboratories and classes to display photographs and slideshows.

Next coming to the digital projector

LCD projectors work by shining a bright light on an LCD panel. Before we talk about the intricate details about the projectors, it is important to know how an LCD panel works.

An LCD panel are translucent screens which creates an image with the help of thousands of pixels. Each pixel consists of three subpixels with colors – Red, Green, and Blue.

To display an image, pixels are switched on or off with the help of liquid crystals. The liquid crystal has a very special property.

They can be rotated or aligned with the help of electric charges to change the polarity of the light. The light then goes through the Red, Green and Blue Filters to finally create an image. Click here to know more about LCD displays.

The LCD themselves do not emit any light and needs a backlight in order to create images.

Here is a great video from the engineering guy which shows the role of backlight in LCD displays and how the backlight is diffused to create an even light source.

Working of LCD projector: The LCD Projector works by shining a high-intensity focused beam of light through the LCD panel, which creates projected images on the wall.

Working of a 3LCD projector

Although the basic principle is the same (ie. shine a focused beam of light on the LCD panel to get an image) but their internal structure is very different and a little complex.

The working principle: As the name suggests, 3LCD projector work by producing an image with the help of three separate LCD panels.

Each one of the panels displays a separate color channel namely – Red, Green, and Blue. At the end, the images from all the three LCDs are combined to make a single RGB image.

Internal structure of a 3LCD projector

A powerful lamp shines a high intensity focused beam of light on a dichroic mirror. The dichroic mirror has an special property where it only reflects a certain range of wavelength and allows the light of other wavelengths to pass unhindered. 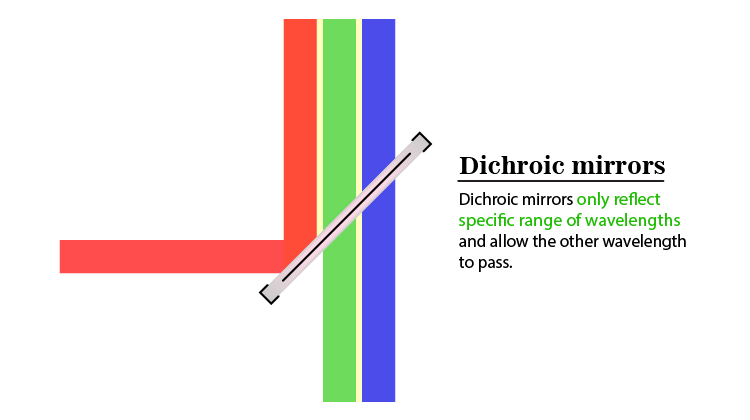 With the help of the dichroic mirrors, the beam of light separates into Red, Green and Blue rays. Which is then channeled towards their respective LCD panels with the help of mirrors.

The Red, Green and Blue lights hit the LCD panels to create a projection of their respective colors. Images from these three LCDs combines together with the help of an special Dichroic prism to create a single RGB image.

Here is a representation of how Red, Green and Blue image channels combines to create an RGB image.

One of the biggest advantages of 3LCD projectors is its excellent color. Breaking an image into its constituent colors and generating each image with its separate LCD panel leads to the creation of image which is more vibrant and colorful. That is why many of the premium grade projectors use 3LCD projectors.

How does a DLP Projector Work

DLP, which stands for digital light processing is a relatively new technology which was developed by Larry Hornbeck of Texas Instruments.

The DLP projectors work using digital micromirror device (DMD) which constantly changes its position – towards and away from the direction of the projection to create an image. Here is a video from Applied Science which discusses the DLP projection technology in detail.

Working of a DLP projector: A powerful focused beam of light passes through a rotating color wheel which creates a flickering Red, Green and Blue beam of light.

The light hits the digital micromirror device (DMD) which instantly align its mirrors towards the direction of projection – according to the input from DLP chip. The reflected rays form an image on the screen.

Why color wheel is used in DLP projectors

DLP projectors use the color wheel to produce colored images. The color wheel is divided in Red, Green and Blue segments. The wheel rotates incredibly fast to create flickering light of three colors (R, G and B). Some of the projectors also use a fourth color (white) to improve brightness and contrast.

The creation of the colored image happens using the flicker fusion threshold and persistence of vision.

If you flash a light bulb for a very short period of time, the image persists for a few microseconds in our eyes – this is called persistence of vision.

If you turn on and off the light at a very quick rate, after a certain point (threshold frequency) the flickering light appears like a continuous ray of light to our eyes. That is how tube light and fluorescent bulbs work.

The same effect is used in DLP projectors to create images. When Red, Green and Blue light are flashed quickly one after another our eyes see them as a continuous colored image.

What is Digital Micromirror Device (DMD)

DLP chips have thousands of mirrors which are arranged in an array of horizontal and vertical rows. Each one of these square micro-mirrors can swivel towards or away from the direction of projection.

The movement of mirrors is controlled by DLP (digital light processing) chip. Here is an image from an electron microscope of a micromirror of a DLP chip – with a missing mirror.

As we can see there are tiny controllers behind each mirror which control their movement. These mirrors are incredibly quick and can change their position hundreds of times in a second.

Did you know?
Digital light processing (DLP) is a trademark name owned by Texas Instruments.

Now you may be thinking laser projectors must be dangerous. As even the weakest laser pointers in the market come with caution to not point the laser at eyes or directly look at them.

In reality, a laser projector is as safe as a lamp projector. The laser projector passes the laser light through a fluorescent diffuser to create soft light which is totally safe.

Lasers have a lot of advantage over lamp projectors. Lasers are energy efficient and can create a brighter light. Further, there is no heating time required which means you can get the best possible performance the moment you press the start button.

A normal lamp projector creates a white light which is later separated into Red, Green and Blue light. All the other wavelengths of non-RGB light are simply wasted, making the system inefficient.

With lasers, you have the ability to create the exact color you need. It is important to note that some of the laser projectors actually uses LED lights in place of lasers.

Projectors with lasers are expensive and that is why you cannot find them in budget projectors. Also once the lamp of the lamp projectors stops working, you can simply replace them. But most of the laser projectors come with a fixed laser which cannot be replaced.