From a technical point of view, a capacitive stylus is a tool that works as an extension of our fingers and helps us interact with touch screen devices. 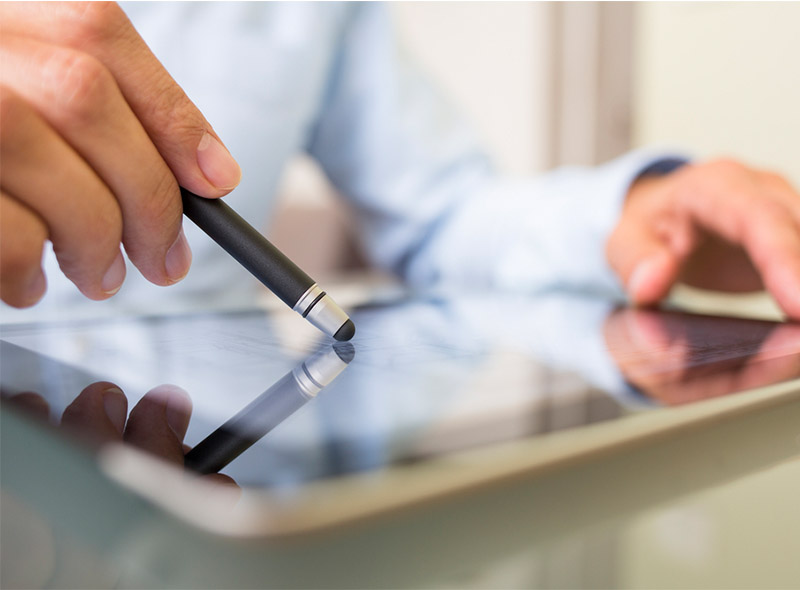 The stylus gives you better control over the movements of the pen and allows you to click smaller areas with greater precision. Allowing you to draw and write significantly better compared to our blobby fingers.

That raises an obvious question – “How does a capacitive stylus work with touch screen devices – that are originally intended to work with our fingers?“.

Well, this is exactly what we will be exploring in this detailed explanation of how a capacitive stylus works.

We will dig deep into the inner working of digital stylus and touchscreen technology and find out how they work together as a team to accept touch input from the user.

How does a Capacitive stylus actually work?

Capacitive styluses work by transferring electric charges from your body to the tip of the stylus where it interacts with the electric field of the touch screen – to generate a touch response.

If you are reading this, it definitely sounds complicated and confusing. But trusts me, it isn’t.

In order to understand what is actually going on, it is important to first know how a capacitive touchscreen work, then we can ease into explaining capacitive styluses.

Components and their arrangement in a touchscreen

A capacitive touchscreen is made of two layers of horizontal and vertical wires running across the screen. The two layers are separated by a transparent insulator in between.

To maximize the coverage on the screen and improve the touch detection – the wires are laid out in diamond grid pattern.

The wires are made of Indium tin oxide, which is a transparent material that conducts electricity and does not affect the visibility of the screen underneath.

The rows of wires at the bottom layer are provided with a constant electric current and therefore called “driving lines“.

The top layer or wires are responsible for detecting the electric current and therefore called “sensing lines“.

Since the two layers of wires are separated by a transparent insulator in between, the electric charges on the bottom layer cannot jump to the top layer. 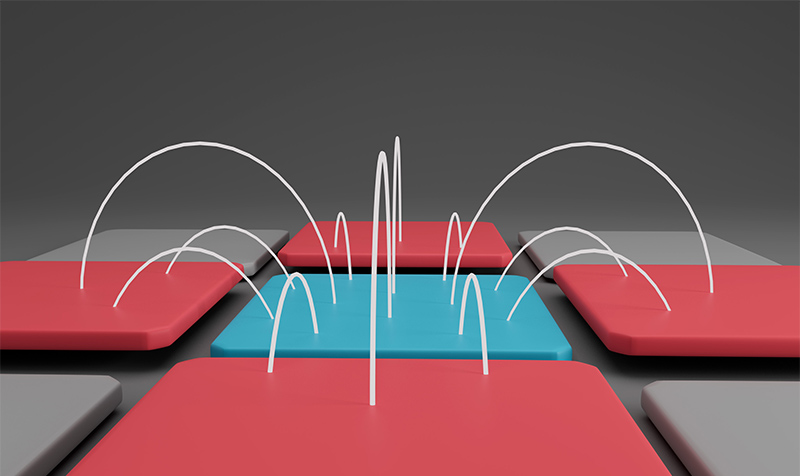 The electrons accumulate on the bottom layer (blue) producing a negative electric field (shown above in thin white lines). This results in the accumulation of positive charges on the upper layer (red). This is what is called a capacitor, hence the name – capacitive screen.

Our bodies are a good conductor of electricity. So when our finger approaches the screen, it interacts and disrupts the electric field. This results in a change in the number of positive charges on the upper layer.

This change in the positive charge changes the capacitance of that area.

The change in capacitance is measured and located on the grid by the sensors installed at the edges of the grid. This change and reported as a touch input.

Explained: Working of a capacitive stylus vs fingers

The tip of the stylus is made of conductive rubber material that allows the charges from the stylus reach to the screen.

With that said, you can’t touch the screen with any random object and expect it to work as a stylus.

There are two main criteria for any object to work as a stylus.

Most simple capacitive styluses in the market have a metallic body that connects to the conducting tip of the stylus. 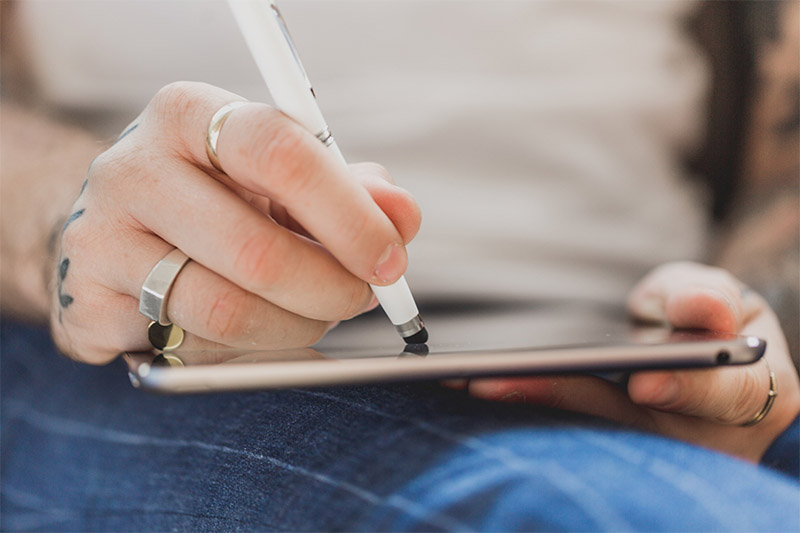 When you hold the stylus the electric charges from your body get transferred to the stylus, which then interacts with the electric field on the touch screen to generate touch input.

Since these capacitive styluses have no electronic parts or batteries inside, they are easier to manufacture and come at a cheap price.

With that said, there are some capacitive styluses in the market that are battery-powered. The battery is used to provide the electric charge instead of relying on the charge from our body, allowing them to work when wearing thick rubber or woolen gloves.

Advantages of a capacitive stylus

Disadvantages of a capacitive stylus

Can capacitive styluses be used for drawing?

Everyone agrees that capacitive styluses are a great choice for writing notes but when it comes to drawing, opinion differs.

If you are an artist you would know that pressure sensitivity is an important feature that artists look for when getting a stylus.

Pressure sensitivity allows you to change the thickness of the strokes (lines) depending on how much force you apply when drawing.

Capacitive styluses do not have pressure sensitivity, it is only available with active styluses.

With that said, not all tablets and smartphones support pressure-sensitive styluses. If your mobile or tablet does not already come with a stylus – chances are it does not support an active stylus.

We would also like to let you know, if you are planning to use the capacitive stylus for drawing and artistic work, there are a number of drawing and writing apps that digitally simulate pressure sensitivity.

Meaning – the apps decide where the lines should be thicker and thinner, and it works amazingly well.

Making a simple DIY Capacitive Stylus (and understanding how it works)

Requirements: Here is everything that you need to make your own capacitive stylus at home. 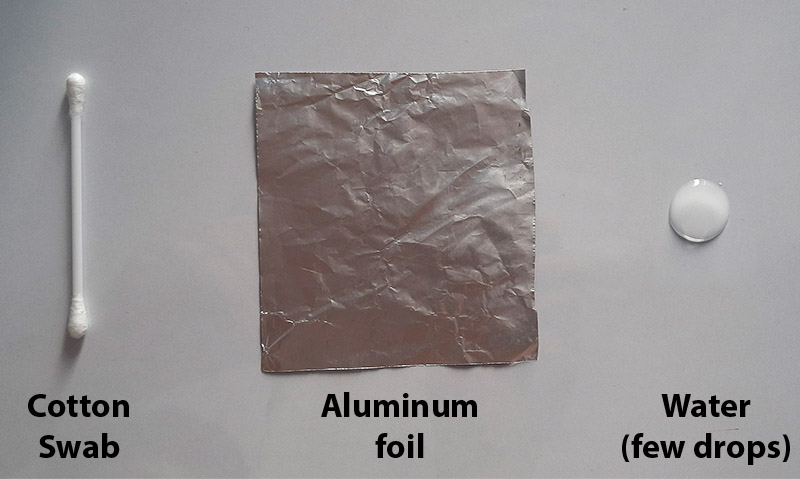 Here is how you make a capacitive stylus.

Take a cotton bud (cotton swab) and wrap it with aluminum foil leaving a little bit of cotton exposed at the tip (as shown in the picture). 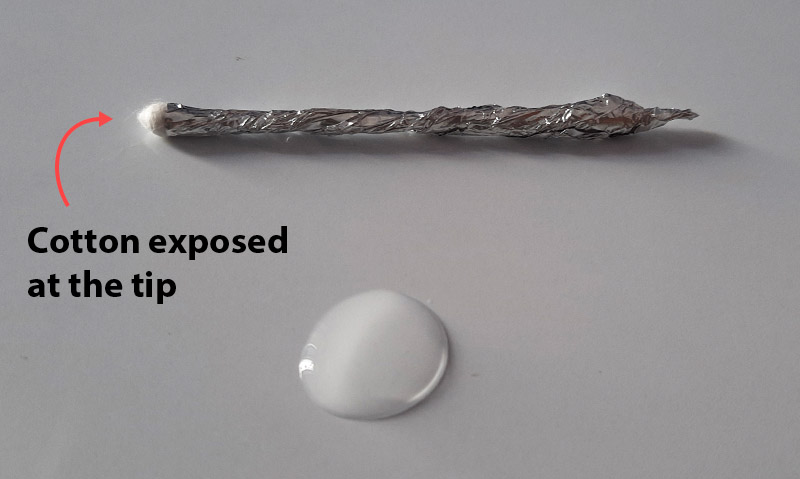 Next, you dip the cotton tip in a few drops of water (just to make it moist), and your stylus is ready.

How and why our DIY pen works as a capacitive stylus?

Aluminum is a good conductor of electric charges. So when you wrap the cotton buds with aluminum foil, it transfers the charges from your body to the stylus.

Since our tip is made of cotton and cotton is not a good conductor of electricity, we need to soak the cotton with mineral water (or normal tap water). Water being a good conductor, carries forward the charges from the aluminum to the cotton tip.

The cotton provides a larger surface area and a softer surface that does not damage your screen. The electric charges interact with the electric field of the touch screen and a touch response is generated.

It is amazing how good this simple DIY stylus works, we highly recommend you to try it yourself.

Here are some of the questions that people frequently ask regarding capacitive styluses.

What does capacitive stylus mean? Does it only work with capacitive touchscreens?

But that does not mean it only works with capacitive touchscreens.

In reality, due to its nature – capacitive styluses can also work with resistive, infrared, optical, and acoustic touchscreen. Or any touchscreen that accepts touch input from fingers.

Do capacitive stylus work with gloves?

There are special gloves in the market that have touch-points at the fingers tips, you can get that if you want to use the capacitive stylus with the gloves on.

Alternatively, there are battery-powered capacitive styluses that works with rubber gloves.

No, they do not need batteries.

Does capacitive stylus have pressure sensitivity?

No, they do not come with pressure sensitivity, programmable buttons, or eraser function.

No, for a capacitive stylus to work the screen must be touch supported. For example, they cannot work with non-touch supported laptops. No stylus can.

Xp Pen Artist 12 Pro Review: Why it is the Best budget tablet

Comparison: Wacom Cintiq vs Cintiq Pro (Which is Better?)