Wacom is popular amongst digital art community for their excellent – top of the line display tablets. As most of their premium tablets are way too expensive for beginner artists, people were asking for a cheaper Wacom tablet.

So how does Cintiq 16 compares to Wacom’s Professional-grade tablets? and should you buy it?

That is what we are trying to answer in this Wacom Cintiq 16 review. You will get a detailed look at all the features this tablet has to offer that will help you make an informed decision on whether this tablet is the right choice for you.

Unboxing – What you get in the box

Wacom tablets are popular for their well thought out designs. The tablet has everything from a great drawing surface to an inbuilt foldable tablet stand within a compact and handy form factor.

The tablet has a modern – minimalist design approach with just a screen and a narrow power button at the front. The Power button has an LED backlight that can be turned off in the tablet settings.

On the backside, you would find screw holes for the VESA compatible tablet stands along with inbuilt foldable legs. The foldable legs, as well as the bottom edge of the tablet, has rubber pads for a better grip of the surface.

Pop up legs can raise the device up to 19 degrees, which is a very comfortable drawing position. The legs fold back and sit totally flush with the surface. If you want more flexibility than you can get a compatible Wacom stand – which gives you more adjustment angles to work with.

The tablet is made of high-quality plastic that helps reduce weight. The tablet feels strong and sturdy with no flexing and creaking noise that you often see with cheap plastic. 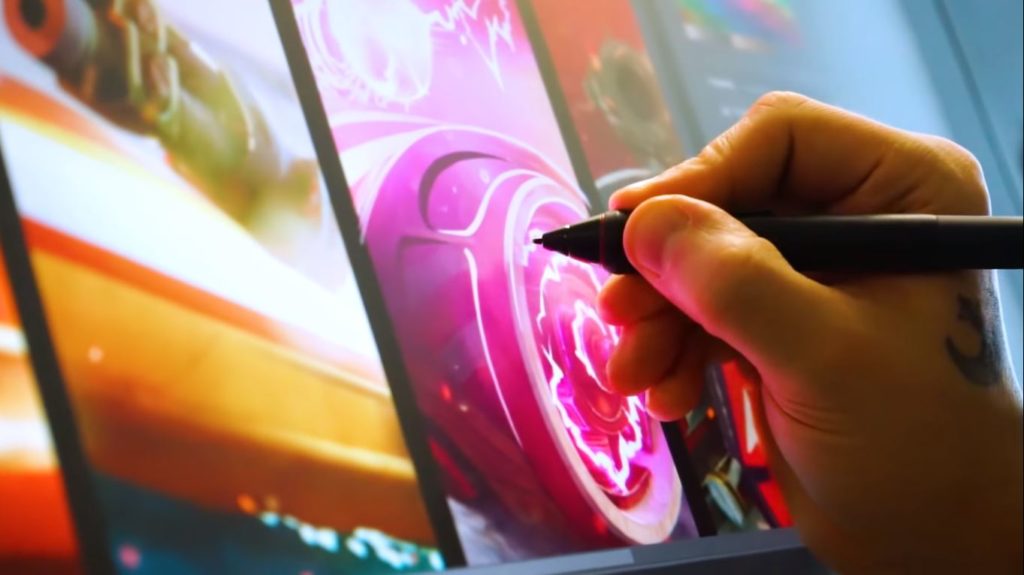 It is very important for a drawing tablet to have a color-accurate screen. The Wacom Cintiq 16 comes with a 15.6 inch 1920 x 1080p full HD screen which covers 72% of NTSC color space. It may not be as accurate as some of Wacom’s other models but given the price, it is decent enough.

The screen has an anti-glare film which not only reduces reflections but also provides friction to the stylus that helps with controlling the stylus better.

A pen is the most important part of a drawing tablet. A good stylus has a very positive impact on the overall drawing experience of the tablet. The Wacom Cintiq 16 comes with the Wacom’s top of the line Pro Pen 2 stylus.

The Wacom Pro Pen 2 is wider than a generic pen or pencil. It has a wider tip which slowly tapers towards the back. This ergonomic design is great for long drawing sessions as it helps with a better grip.

The stylus is well balanced and feels really good to use. There are two side buttons on the side of the stylus. These buttons can be programmed to any shortcut of your choice in the pen settings.

Along with these buttons, there is a pressure-sensitive button at the back which works as an eraser.

The pen is made of plastic and has a rubber-like material at the front. It is center-weighted and feels very comfortable and balanced, which makes it easier to use it for a longer period of time.

The pen comes with 3 extra nibs. The nibs can be replaced once it gets worn off. The extra nibs are present in the pen holder fabric located at the side of the tablet.


Wacom pro pen 2 comes with 8192 levels of pressure sensitivity and tilt recognition up to 60 degrees. Now you may ask what’s the big deal, every single pen these days comes with an 8192 levels pen pressure. But there is a difference…

There are a lot of minor things that add up to make a big difference in how a pen works.

The initial activation force, the pressure balance, and responsiveness are some of the key factors which determine the pen performance.

The strokes made by Wacom Pro Pen 2 are smooth and consistent with no weird pen jitter (wavy lines) or sudden pressure bumps. The pressure sensitivity also feels balanced with the option to customize it in the pen settings.

Connection the tablet to the computer 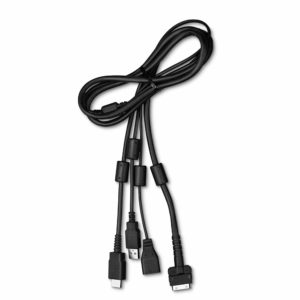 Cables are flimsy, inconvenient and usually the first thing to break. The wireless technology is not competent enough to replace cables. So most of the devices aim to minimize wires.

The Wacom Cintiq 16 comes with a hybrid 3 in 1 cable that has 3 connectors coming out of one end and 1 connector on the other.

If your laptop does not have an HDMI or USB type-A port, you can get a USB hub (Amazon).

The cables including the AC adapter is long enough for most of the people and you will not have issues even if your CPU is away from the desk.

As you may have observed by now, Wacom Cintiq 16 does not have any customizable buttons on the tablet. If you really want to use shortcut keys – then you will need the Expresskey remote (Amazon).

The Expresskey has a total of 17 buttons and a touch ring, which gives you more than sufficient buttons to work with. Its buttons have different shape and sizes along with little-raised bumps and dots to help identify them without looking. It connects wirelessly and works very well.

There are no magnets on the side bezel of the Cintiq 16 to magnetically stick the Expresskey remote to the tablet, like what we have seen in Cintiq Pros. 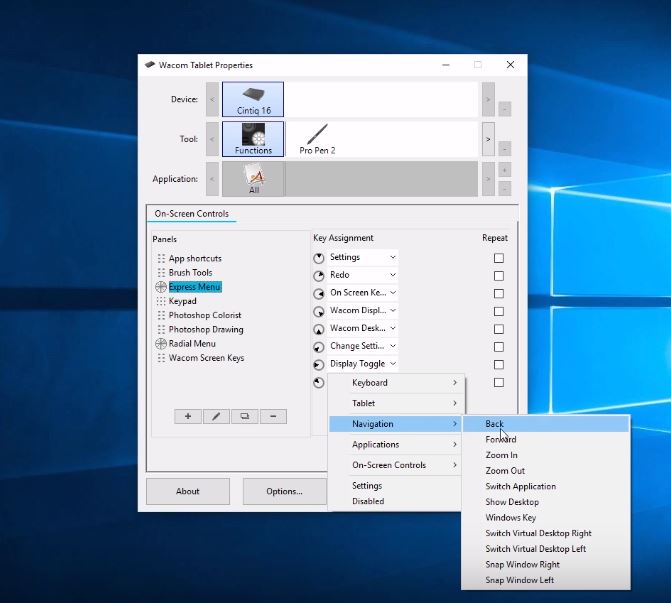 If you don’t want to get an Expresskey remote there are alternatives. Other than the keyboard, you can also use the on-screen buttons for shortcuts.

The Wacom driver gives you full customization for the on-screen buttons and they are easy to work with once you get the hold of them.

Wacom has one of the most stable, reliable and easy to use Driver. The driver allows your computer to communicate with the tablet and understand pen, pressure and tilt data. It also gives you extra settings to fine-tune your tablet as per your liking.

The latest version of the Cintiq 16 driver is available to download from the Wacom’s official site. The driver allows you to customize shortcut buttons on the pen as well as Expresskey remote. It also allows making changes in the pressure sensitivity of the pen – which controls how hard or soft you have to press to see stroke variations.

By default, the screen is perfect and needs no calibration in most cases. In case you want to make changes, the driver gives you additional settings for color, brightness and contrast.

One of the advantages of Wacom Cintiq 16 is – it supports many of the Wacom’s accessories. Starting off with the pen, the device supports Wacom Pro pen 3D as well as all the other specialized pens like grip pen, airbrush and art pen. Next, as we already mentioned – the tablet has no shortcut buttons but it supports Wacom Expesskey remote.

The tablet comes with a mini stand but it also has holes at the back for the Vesa mount. So you can use any Vesa mount supported stand including the Ergotron stand.

How to set up Wacom Cintiq 16

Setting up the Wacom tablet is quite simple, here is a tutorial to help you with that.

One of the best ways to know how Cintiq 16 compares to Cintiq Pro models – is to compare it with the Wacom Cintiq Pro 16. They both have similar screen sizes and very comparable in a lot of other ways.

Cintiq 16 (Amazon) and Cintiq Pro 16 are very similar to each other. They both come with the exact same pen and supports the same accessories like the Expresskey remote. Both of them works as a secondary screen and have to be connected to an external computer instead of being a standalone tablet.

Talking about differences – The pro model has a higher resolution screen and slightly better color accuracy. The pro model is thinner and has a smaller footprint.

It supports touch input and has a magnetic side bezel for sticking express key remote and lastly, it comes with a pen stand.

If you take a closer look at both the tablets, you will find that in spite of the major price differences there are a lot of things which are similar, and the differences are not that big.

Like – for sure 4k resolution is great but on a 16-inch screen even full HD is sharp enough, or the touch support is cool to have but many people disable it anyways. These differences may increase convenience a bit but do not affect your work in any major way.

You get the same pen and with the same textured glass with exact same basic drawing features, so no difference there and that is why you are getting “80% of the tablet at 30% price“.

Wacom had to make some smart decisions in order to cut the cost without losing much functionality. We are going to take a look at what are the things they have compromised to bring down the price.

Screen – Unlike the pro models, the Cintiq 16 has a 1080p full HD screen with 72% NTSC color gamut in place of 99% Adobe RGB in pro models. In this way the screen may not be as good as it can be but still is decent enough to work comfortably without any noticeable difference. It is still one of the best screens you can get in this price range.

Accessories – Wacom Cintiq 16 does not come with any pen holder. In place of that, it comes with a little fabric loop to store the pen which is placed at the side of the screen with extra pentips stored in it.

No-touch Support – You can argue touch is an important feature that is absent in this model. But the truth is, the touch controls in the Wacom tablets are not very fluid and they tend to interfere with the hand while drawing due to its average palm rejection capability.

So most of the artists end up turning it off while drawing. Besides that, all the zoom/rotate function can also be done through the Expresskey remote.

Summary – Is Cintiq 16 the right tablet for you? 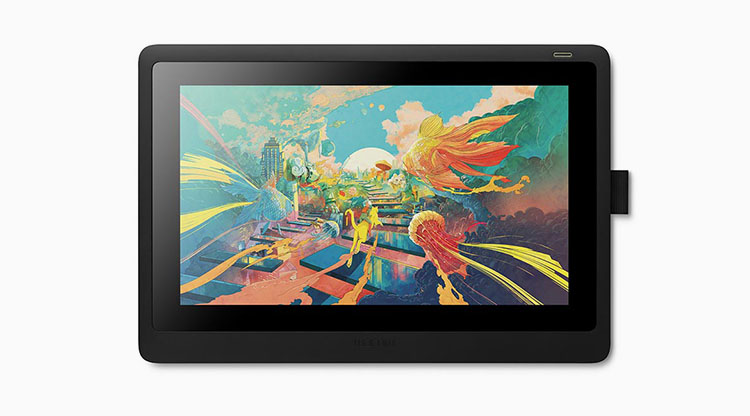 The Wacom Cintiq 16 can be a great option for artists who want a display tablet but cannot justify spending thousands of dollars on premium drawing tablets.

One of the best things about the tablet is, In spite of being a budget tablet Wacom has still included their top of the line stylus – the Wacom Pro pen 2.

The only complaint about the tablet is – it does not have any shortcut button on the side of the tablet. But you can always use the keyboard for performing shortcuts, so it gets a pass.

Overall it is a great tablet that does its job well, but there are other tablets that are available in this price range. Before you make any final decisions make sure to check out Huion Kamvas Pro 16 & Xp Pen Artist 15.6 Pro comparison with  Wacom Cintiq 16.

Click here to check the latest price of Wacom Cintiq 16 on Amazon.