The last few years have seen a sudden influx of cheap drawing tablets, each claiming to be better than the other. More often than not – these budget graphics tablets overpromise and underdeliver. 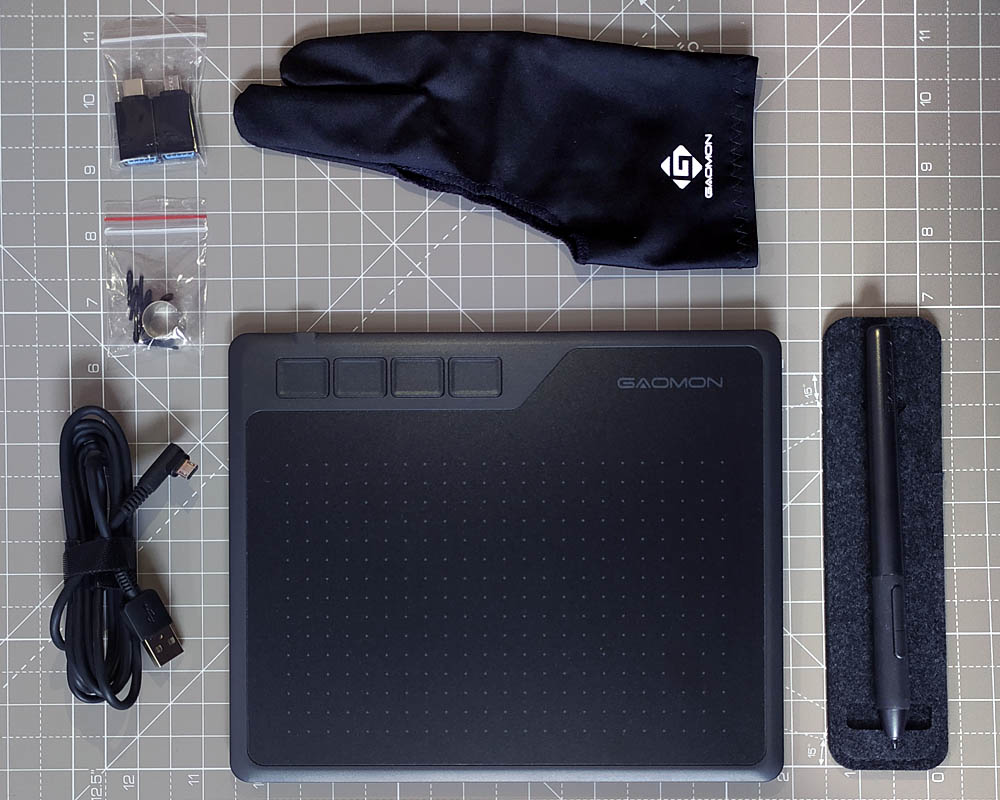 Out of all these tablets, there are some devices that stand out. The Gaomon S620 is one such tablet that has gotten a lot of attention from digital artists as well as fast-paced rhythm gamers.

This tablet has a lot going for it. It has a better build quality, top of the line features, a battery-free stylus plus an attractive price tag.

In this Gaomon S620 graphics tablet review, we will do a close inspection of all the features this tablet has to offer.

We will also find out what makes this stand out from all the other options in the market and whether you should buy it or not.

Like we always do, let’s start by having a look at all the main features of the Gaomon S620.

Unboxing – What comes in the box

Being a cheaper graphics tablet, we were not expecting much from the unboxing. To our surprise, the Gaomon S620 actually comes with many add-ons and accessories.

The box contains all the essential items you need to get started. Here is the list of everything that comes with the tablet. 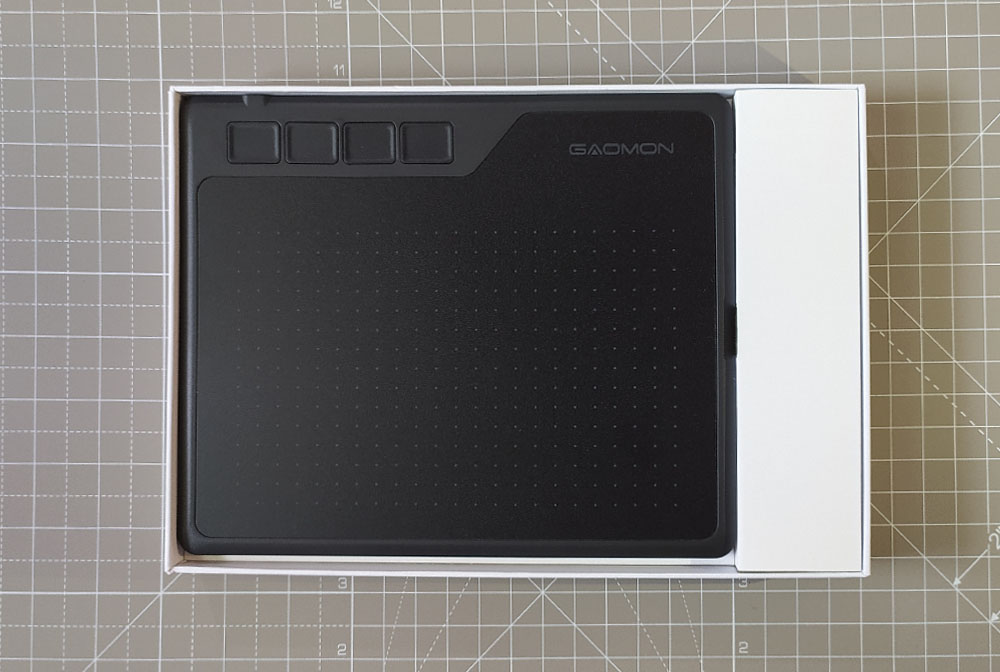 The tablet is made of plastic which is kind of expected in a cheap tablet. But the quality of the plastic that is used is actually really good.

The tablet has a matte black color which does a good job of concealing fingerprints.

The corners of the tablet are round and beveled giving you a smooth and consistent feel all around.

The rounded sides along with the 8mm low thickness make it very comfortable to use, without feeling like you are drawing on a thick plank of wood.

The shortcut buttons are present on the top left portion of the tablet, meaning if you are left-handed you may find it inconvenient to reach the buttons. But in that case, you can always use the keyboard instead.

On the top edge of the tablet, you will find a micro-USB connector for connecting the tablet to the computer.

On the backside, there are four round rubber pads on each corner. These provide a better grip on smooth surfaces.

The Gaomon S620 has no loose parts and makes no creaking sound, to top it all off – the tablet has almost no flexing even after applying some force on the the surface.

Overall you are getting a strong and sturdy tablet with an excellent build quality, which can easily handle day to day usage.

If you are a student and want a tablet that is easy to carry, the Gaomon S620 is compact enough to easily fit in the front compartment of most backpacks.

The tablet comes with an active drawing area of  6.5 x 4 inches which is a decent size if you are planning to use this on your laptop screen on monitor that measured less than 21 inches.

For bigger monitors, we recommend a drawing tablet with a larger drawing area.

The surface texture is another important feature of a drawing tablet.

Drawing on a plastic surface with a stylus that has a plastic pen tip, you can imagine you won’t get the same satisfying feeling that you get while drawing on a paper.

To counter this, drawing tablets come with a textured surface. The textured surface is minute irregularities on the surface of the tablet that provides friction to the stylus resulting in a more controlled stylus movement and a better drawing feel.

Other than surface texture, the drawing surface of Gaomon S620 also has scratch-resistant properties.

It works on an EMR technology where it takes it power wirelessly from the tablet itself resulting in a stylus that does not need to be charged.

The pen has 8192 levels of pressure sensitivity, which is the same as what you get with top of the line stylus in the market.

Other than that, there are two customizable buttons on the side of the tablet with no eraser at the back.

The tablet does not come with a pen stand, which is kind of a bummer, but what you get instead is a fabric pen slot which can be used to safely store the stylus while it is not in use.

The Artpaint AP32 is a lightweight stylus and has a fairly simple design. It has a cylindrical body with a wider front are and narrower back.

The front half of the stylus has a silicon material that provides a better grip, especially on sweaty fingers. Weight distribution on this pen is also on point the pen is lightweight and well balanced which makes it easier to maneuver.

So far all good, but one thing that we noticed during using the pen is – the stylus feels a little too plasticky and cheap.

This is one of the most important parts of the drawing tablet. A good stylus is expected to have a smooth and consistent performance and this is exactly what we found in the Artpaint AP32 stylus.

The stylus has a very balanced pressure sensitivity with a smooth transition between lower and higher pressure. Plus you have the option to further optimize the pressure as per your liking in the pen settings.

The initial activation force required is also not that bad. The stylus has no pen jitter (wavy lines) on fast as well as slower strokes. We also never encountered any inconsistent pressure bumps.

Overall the pen included with the Gaomon S620 matches the quality of the tablet in terms of performance and you will have a good drawing experience on it.

Over a period of a few months of continuous usage, the nibs of the stylus starts getting worn off. For that, the Gaomon S620 comes with eight extra Pen nibs. A nib remover tool is also included in the box to make it easier to change the nibs.

There are four programmable shortcut buttons present on the top left side of the tablet. The buttons are very tactile and create a distinct click sound when pressed.

The Gaomon driver also allows you to create an application-specific shortcut. By that we mean you can have different shortcuts for photoshop and Krita. And the tablet automatically switches the shortcuts depending on the application you are using.

Connecting the tablet to the computer

Connecting the Gaomon S620 to the computer is fairly simple.

First, you need to install the driver, which is free to download and available on Gaomon’s website. 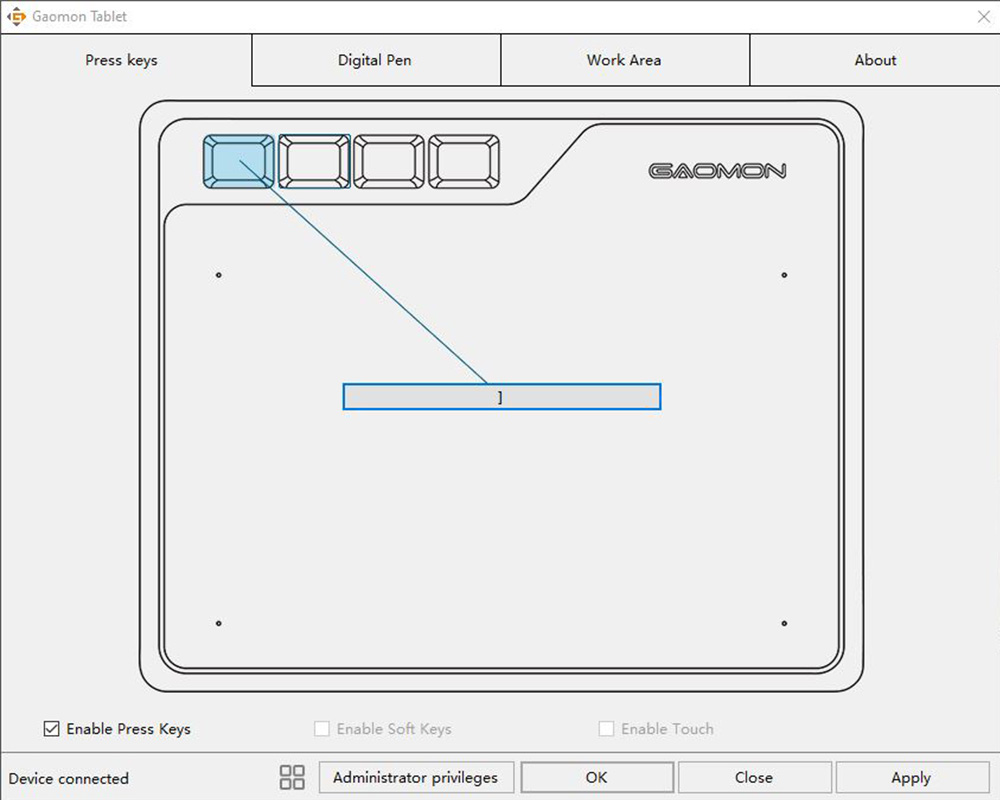 The drivers communicate with the computer and help them better understand the pressure and tracking data.

The driver allows you to make advanced settings such as programming the shortcut buttons, remapping the tablet, and changing the pressure sensitivity of the stylus.

The only feature that we found missing on the driver is, the driver does not allow you to set the buttons on the stylus to switch between a pen and an eraser.

Along with Windows and Mac, this tablet can also be used with Android devices. 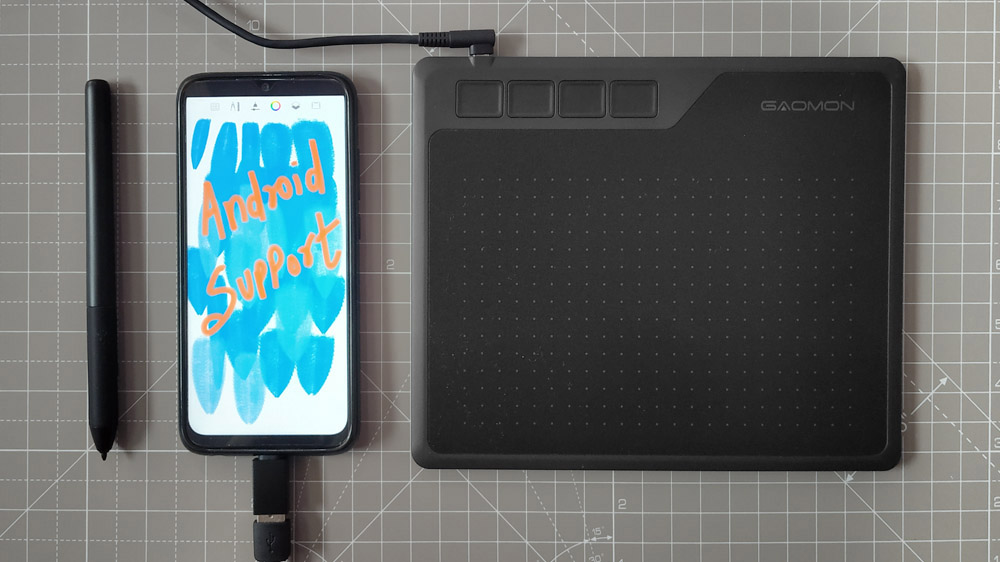 For using this tablet with Android smartphones and tablets you don’t need to install any driver, simply plug in the cable to the phone via the included adapter and get started.

One thing to keep in mind, especially if you have older Android devices is – make sure the phone supports OTG connectivity.

For connecting your Android tablets and smartphones with the graphics tablet, the Gaomon S620 comes with a USB-C to USB and Micro-USB to USB adapter.

There are a number of really good drawing apps for Android that you can use to draw on. The pressure sensitivity of the stylus works as expected but you cannot customize the pressure. We found none of the shortcut buttons either on the pen or the tablet works in Android mode.

Here are some of the most commonly asked questions on Gaomon S620.

Do you need to install the driver?

Yes! and No. In order for your tablet to work, you need to install the driver, this is only applicable for Windows and Mac computers.

In case you are using the Gaomon S620 with Android devices, you don’t need to install the driver.

Can Gaomon S620 be used for playing OSU?

The Gaomon S620 is a highly recommended tablet for playing OSU, mainly for two reasons. One – it is much cheaper than other options in the market. Two – the tablet has a very fast response rate of 266 reports per second which is ideal for a fast-paced game like OSU!

Conclusion – Why you should buy the Gaomon S620? 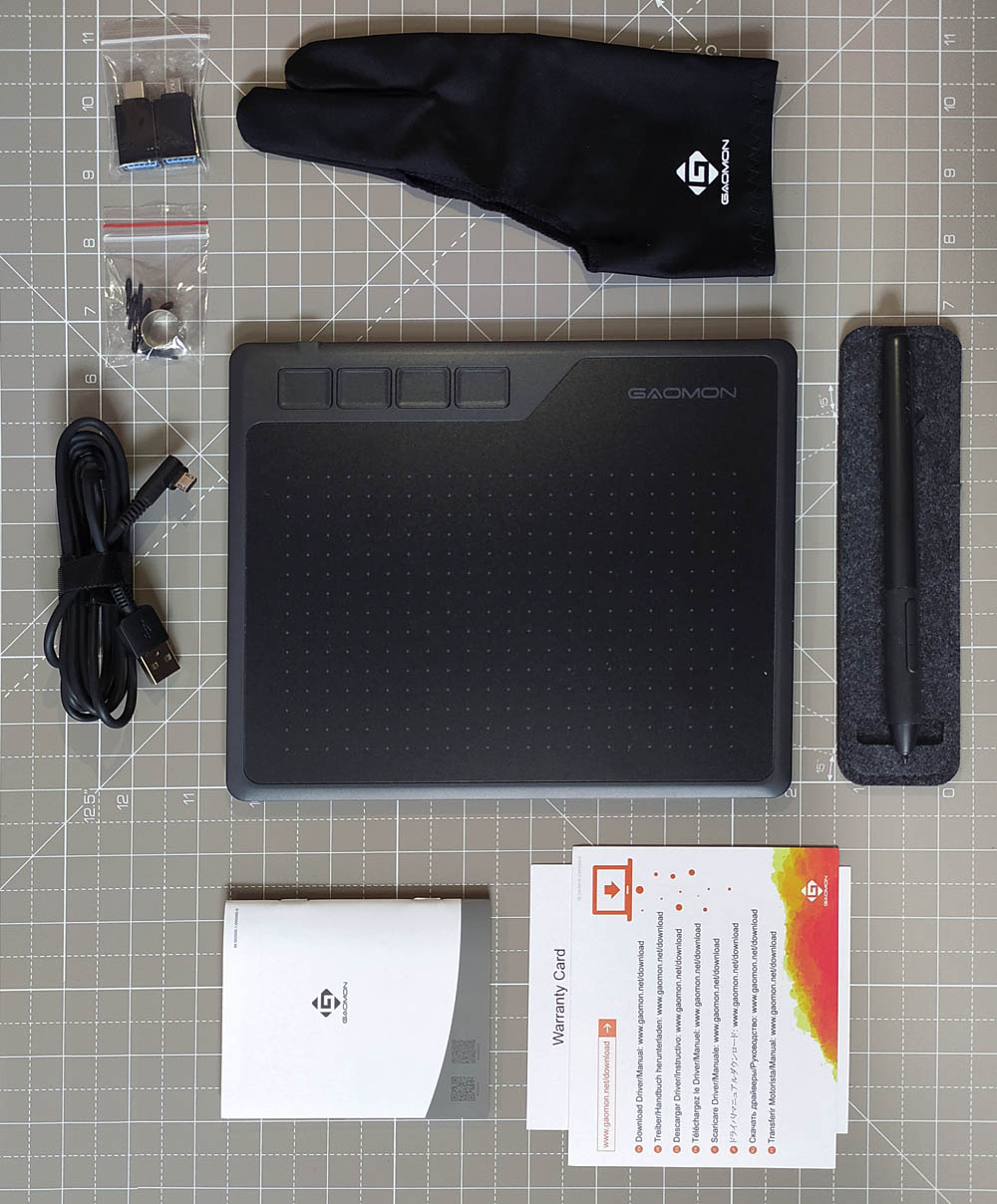 Out of dozens of budget drawing tablets that we have tested so far, the Gaomon S620 is one of the better options. Before writing this review we used this tablet for around three weeks, and in these three weeks, we had no issues whatsoever.

Now Gaomon has definitely compromised with the build quality of the stylus for keeping the prices low but on the other side, this tablet also supports Android devices which is quite a rare feature in this price range.

Overall if you are looking for a good budget drawing tablet – the Gaomon S620 is a great option and you would have a wonderful experience using it.

Buy on Amazon →
Buy on AliExpress →

Shubham Singh is an Adobe Certified Graphic Designer and a 3D artist. He likes to acquire new skills and explore how things work.

How much does a drawing tablet cost? Are they expensive?

Xp Pen Artist 12 Pro Review: Why it is the Best budget tablet