The Innovator 16 is one of the newer 16-inch drawing tablets from Xp Pen. 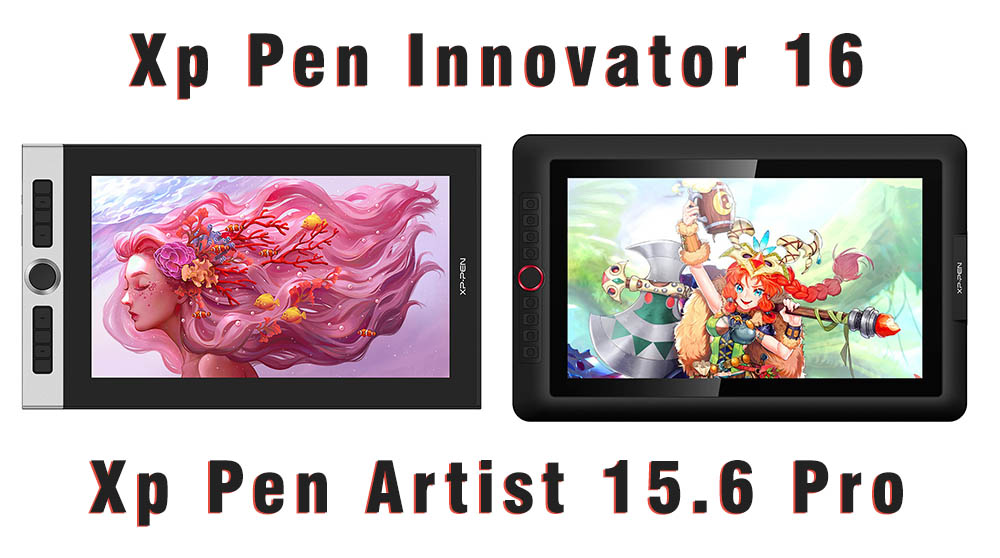 What makes it stand out from other tablets in the market is its combination of premium metallic design, portable form factor, and a reasonable price that we haven’t seen in any other tablet before.

Some of the design elements of the Innovator 16 seems to be taken straight out of the Xp Pen Deco Pro lineup of graphics tablets, they give the tablet a very appealing look.

But how it compares to the Artist 15.6 Pro which is also a 16-inch drawing tablet from the same brand and comes at a slightly cheaper price.

While the design is new, looking at the features tells a familiar story.

In this Xp Pen Innovator 16 with the Xp Pen Artist 15.6 Pro comparison, we will compare everything from features, design, accessories as well as the price in order to get a holistic view of both these tablets.

In the end, we will share our views on – which of the two tablets would be a better choice for those looking to buy their next drawing tablet.

Unlike a monitor or a printer – a drawing tablet is a very hands-on device. So it is important for them to have a functional design that is convenient to use and a robust build quality that feels inviting.

The innovator 16 is a breath of fresh air compared to other drawing tablets with a run of the mill – plastic material and overall cheap build quality.

Comparing the Xp Pen Innovator 16 to the Artist 15.6 Pro you can feel a huge difference in quality.

The Innovator 16 comes with a fully metallic body from the front as well as the back. Even the shortcut dial as well as the power and brightness buttons on the side are metallic – giving you a very premium feel.

Both the tablets have a very similar design with the Drawing area on the left and shortcut buttons on the right. But the buttons on the Innovator 16 look more mature and minimalist and have better tactility.

Talking of dimensions, the Xp Pen Artist 156 Pro is already a thin tablet measuring just 12.6 mm making it easy to fit in your backpack and quite portable.

The Innovator 16 takes this portability and slim profile to the next level. It measures just 9mm in thickness which is actually very impressive considering this tablet has a built-in screen.

Other than that, the Innovator 16 also has smaller bezels which result in the tablet being a 24mm shorter in height compared to Artist 15.6 Pro – even though both these tablets come with the same screen size.

The back of the tablet is made of metal and as we know metals are slippery on smooth surfaces.

The Xp Pen should have included rubber strips at the back, which is not present on Innovator 16. This may result in the tablet not having a stable grip when used on smooth surfaces.

On paper, the Innovator 16 comes with slightly better color accuracy of 125%sRGB compared to 120% RGB in Artist 15.6 Pro, but in real life usage, the difference is not that noticeable.

One thing that you should keep in mind is, even though the display is capable of showing accurate colors – chances are the display is not color calibrated out of the box.

So if you find the colors on your screen a little off, just open the settings and play with color settings to get the right colors.

Drawing tablets, especially the older ones often faced the problem where the lines drawn by the stylus appeared a few millimeters away from the point where the stylus is actually touching the surface.

This is what is called “parallax”. This happens when the protective glass layer at the top and the actual display unit has a small gap in between them.

The laminated displays have all the layers of the screen laminated together with the top glass which results in no parallax.

Using drawing tablets with laminated displays you would notice that the strokes appear exactly where you are touching at the surface.

The good news is – both the Xp pen Innovator 16 as well as the Artist 15.6 Pro comes with a laminated display, providing you a really good drawing experience.

When you draw with a stylus on a tablet with a glass screen, it results in the stylus slipping a little too much on the smooth surface of the tablet.

The textured screen has minute irregularities on the surface that provides resistance to the stylus. Drawing on the textured surface, the stylus provides a controlled drawing experience.

The textured surface has a matte effect on the screen. The matte screen reduces reflections and glares off the screen and helps improve the visibility of the screen. 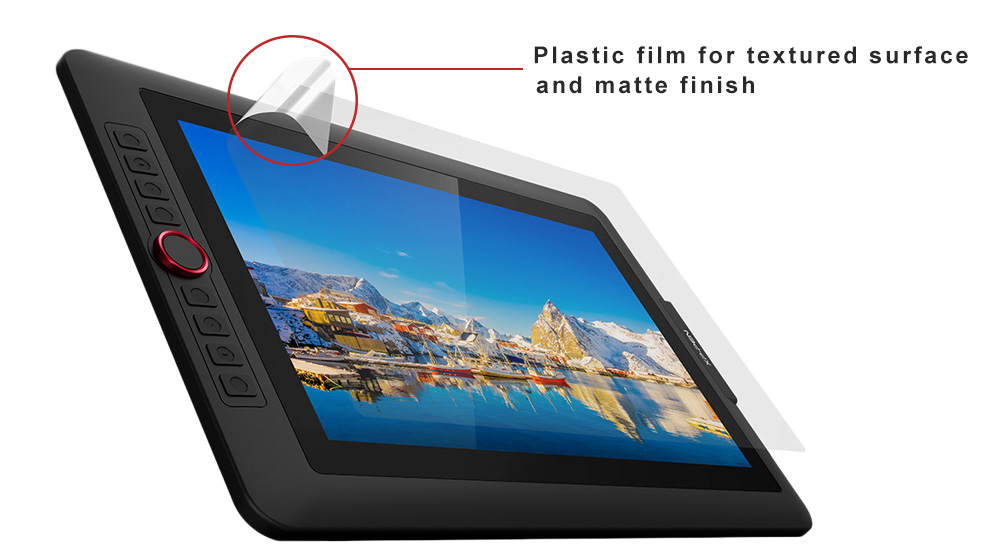 Both the Xp Pen Artist 15.6 Pro and the Innovator 16 come with a plastic layer (film) applied on the screen. This is responsible for the textured surface and matte effect.

Being a premium drawing tablet we were expecting the Xp Pen Innovator 16 to have an etched glass instead of the textured film.

With etched glass, the texture is present directly on the glass itself – resulting in better scratch resistance and a rougher texture.

Xp Pen has been making drawing tablet for a very long time. And at that time they have really mastered the stylus technology.

Both these stylus has 8192 levels of pressure sensitivity as well as 60 degrees of tilt support.

The real-life performance of this stylus is also good with accurate tracking and balanced pressure sensitivity and no signs are inconsistent strokes and weird pressure bumps.

The innovator 16 comes with an upgraded model of the stylus that has a better initial activation force.

A very robust cylindrical pen holder is included with both the tablets.

The pen holder doubles as a pen stand and has a secret compartment at the back which stores the extra pen nibs.

Both the tablets come with a total of 8 shortcut button located on the left side of the tablet.

The buttons on the Artist 15.6 Pro all look the same and stick out a little over the surface of the tablet.

The button on the Innovation 16 on the other hand – sits flush with the surface. They come varying shapes with raised dots and dashes in order to identify them without looking.

The multipurpose shortcut is useful when performing complex shortcuts such as zoom, pan, scroll, and change the size of the brush and eraser.

The rotating dial on both the tablets has a very smooth and quality feel to them. The movement of the Dial wheels is buttery smooth and they make a click sound on rotating which feels very satisfying.

The touch-based virtual dial on the Innovator 16 works just like the rotating dial but instead of rotating it, you have to move your fingers over it in a circular motion.

In real life usage, the Xp Pen Innovator 16 is more practical and convenient to use as it has both the touch as well as the physical wheel.

Both the drawing tablet comes with the same basic tablet stand that is totally made out of plastic.

It would have been better if the Xp Pen had included a metallic stand to match the overall design of the Xp Pen Innovator 16.

But you can always upgrade the tablet stand and get a better one with metallic construction to match the innovator 16. They also come with more adjustment angles.

The Innovator 16 and the Artist 15.6 Pro are not standalone drawing tablets and therefore need to be connected to a computer.

In order for the tablet to work properly, you need to install the driver.

The driver helps the computer communicate with the tablet and helps it under pen pressure and tablet data for better compatibility.

Using the driver, you can customize and reprogram the default shortcut buttons to any other shortcut of your choice. You can also switch the tablet in the left-hand mode – which is helpful if you draw with your left hand.

Unboxing – what you get in the box

Here is everything that you get in the box.

Which drawing tablet should you actually buy and why?

The Innovator 16 and Artist 15.6 Pro actually have a number of similarities. They both are 16-inch tablets made by the same brand and come at a similar price point.

The main advantage of the Innovator 16 is that you getting a tablet with a premium build quality. The tablet is incredibly thin and has a smaller footprint in spite of having the same screen size.

The stylus of the Innovator 16 is also more sensitive and has a lower initial force of activation. This allows the stylus to react with the slightest of pressure on the stylus.

Other than that the Innovator 16 also comes with a slightly better screen in terms of color accuracy and contrast.

For shortcuts, the Innovator comes with a touch wheel that is absent from the Artist 15.6 Pro.

Considering all the facts mentioned above, it is very clear that Innovator 16 is a superior tablet.

The Artist 15.6 Pro is obviously cheaper but the difference in price compared to Innovator 16 is not that big. For all these reasons we highly recommend you get the Xp Pen Innovator 16.